'Despite pandemic, India will realize its dream of self-reliance’: PM Modi 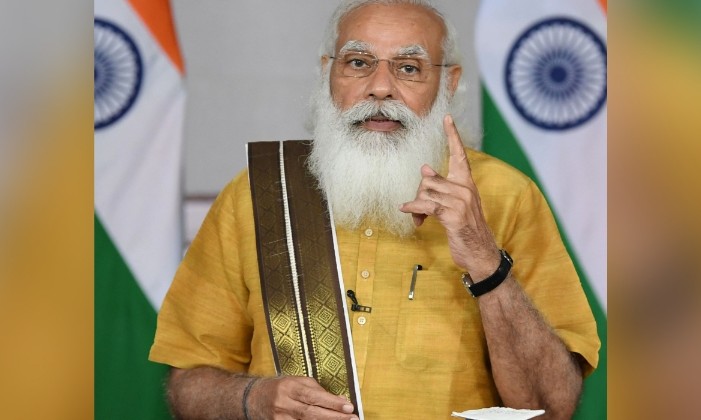 PM Modi chairing a meeting of CSIR Society through video conferencing in New Delhi on June 4, 2021

“All scientists and industries must repeat the success achieved during COVID crisis in every field,” said the Prime Minister

Prime Minister Narendra Modi on Friday said even as coronavirus might have affected the pace of development, the commitment to realize the dream of self-reliance remains.

“There is immense potential in every field from agriculture to the education sector for our MSMEs and Startups,” he said while chairing a meeting of the Council of Scientific and Industrial Research (CSIR) Society through video conference. He urged all the scientists and the industry to repeat the success achieved during COVID crisis in every field.

He said today’s goals of the country and dreams of the countrymen of the 21st century are based on a foundation. So goals of institutions like CSIR are also extraordinary. Today's India wants to be self-reliant and empowered in every sector, from biotechnology to battery technologies, from agriculture to astronomy, from disaster management to defense technology, from vaccines to virtual Reality.

Therefore, he said that India’s goals should be in line with the needs of this decade as well as for the next decade.

The Prime Minister remarked that experts around the world are constantly expressing huge apprehension about climate change. He gave a call to all the scientists and institutions to make preparations with a scientific approach. He asked them to take lead in every sector from carbon capture to energy storage and green hydrogen technologies. He urged CSIR to take society and industry along.

He lauded CSIR for starting to take suggestions from people following his advice. He praised CSIR for its role in the Aroma mission launched in 2016. He added that today thousands of farmers of the country are changing their fortunes through floriculture. He lauded CSIR for helping in cultivation of asafoetida within the country for which India was dependent on imports.