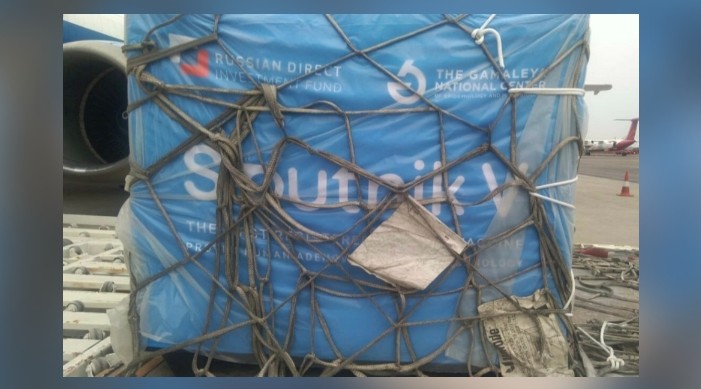 The consignment received speedy customs clearance after landing at Hyderabad airport. It will now be headed for Dr Reddy’s Labs, the Indian partners of the makers of the vaccine, Russian Gamaleya Institute.

The doses arrived on the day India opened up its countrywide vaccination drive to everybody over 18 years of age.

"Sputnik-V vaccine arrives in Hyderabad from Russia! Will add to India's arsenal to fight the pandemic. This third option will augment our vaccine capacity & accelerate our vaccination drive," said Ministry of External Affairs Spokesperson Arindam Bagchi on Twitter.

This was the first consignment of 1.5 lakh doses of Sputnik-V vaccine with millions of doses to follow under plans to Make in India for use in India, Russia, and third countries, Bagchi added.

According to the MEA Spokesperson, this was a result of over a decade of special and privileged partnership with Russia. "Deeply value support from long-standing friend Russia," Bagchi added in his tweet.

India launched a massive Covid-19 vaccination drive on January 16 this year, using two Made-in-India vaccines - Covishield and Covaxin - which had received Emergency Use Authorization (EUA) from the expert committee of India's drug regulator.

On April 12, the Russian Sputnik V became the third vaccine to be authorized for Emergency Use in India.

The Russian Direct Investment Fund (RDIF) had partnered with Dr Reddy's in September 2020 to conduct clinical trials of Sputnik V in India.