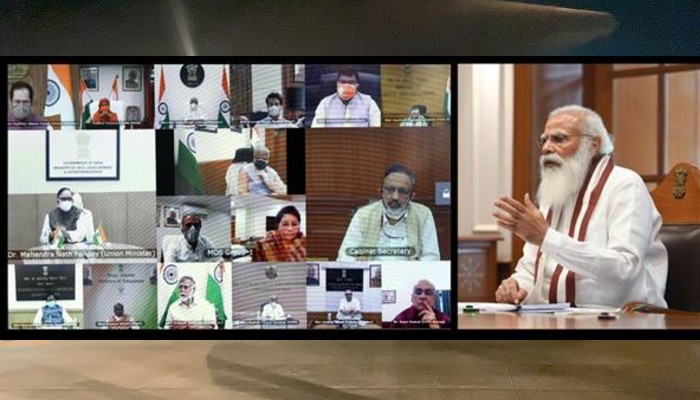 Prime Minister Narendra Modi on Friday said that all arms of the Government are working unitedly and rapidly to deal with the situation.

The Prime Minister said while chairing Council of Ministers’ meeting, which was held to discuss the situation arising out of the second wave of Covid-19 in the country.

The Prime Minister also urged the Ministers to stay in touch with people of their respective regions, help them and keep getting their feedback. He stressed upon the need to ensure that issues at the local level are promptly identified and addressed.

The Council also reviewed all the efforts made in the last 14 months by the Central and State Governments and the people of India.

The efforts by the Central Government in coordination with the states towards building up infrastructure in the form of ramping up hospital beds, PSA oxygen facilities, resolving issues in production, storage & transport of Oxygen, tackling matters relating to availability of essential medicines were briefed.

It was also noted that India could successfully produce two vaccines and there are many candidates at the various stages of approval and induction. More than 15 crore vaccinations have been done as on date.

The Council of Ministers also stressed the importance of Covid appropriate behaviour– wearing a mask, keeping a physical distance of 6 feet and washing hands frequently.

The Council reiterated that the participation of society is a key aspect to accomplish the gigantic task ahead and expressed confidence that the country will rise to the occasion and defeat the virus.