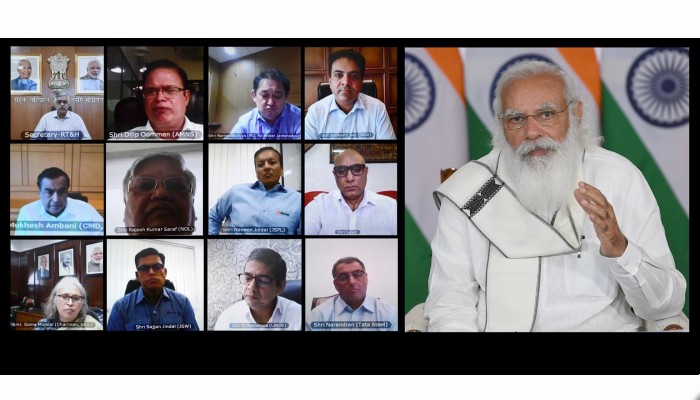 Holding a virtual meeting with leading oxygen manufacturers, Prime Minister Narendra Modi on Friday spoke about utilizing the full potential of the industry to meet the demand of oxygen in the coming days.

He appreciated the oxygen producers for increasing their production in the last few weeks.

The Prime Minister acknowledged the several steps taken to increase the production of liquid oxygen. He thanked the industry for diverting industrial oxygen to meet medical requirements in the country.

To improve the situation further, PM Modi spoke about utilizing the full potential of the industry to meet the demand of oxygen in the coming days.

PM Modi noted that there is a need to increase the availability of oxygen cylinders as well as upgrade the logistics facilities for transportation of oxygen. He urged the industry to utilize tankers meant to transport other gases for oxygen supply.

The Prime Minister said keeping in mind the requirements of states pertaining to oxygen, the government is working on effective use of railways and Air Force so that the tankers reach the production centre as soon as possible.

He said the government, the states, the industry and the transporters, and all the hospitals need to come together and work in unison.

The better the synergy and coordination, the easier it will be to deal with this challenge, the Prime Minister added.

Arguing that the time is not only to deal with the challenges, but also to provide solutions in a very short time, he stressed on the need to maintain good co-ordination between the government and the oxygen producers.

Appreciating the oxygen producers, PM Modi extended government’s full support to them and hoped the country would be successful in combating the crisis soon.