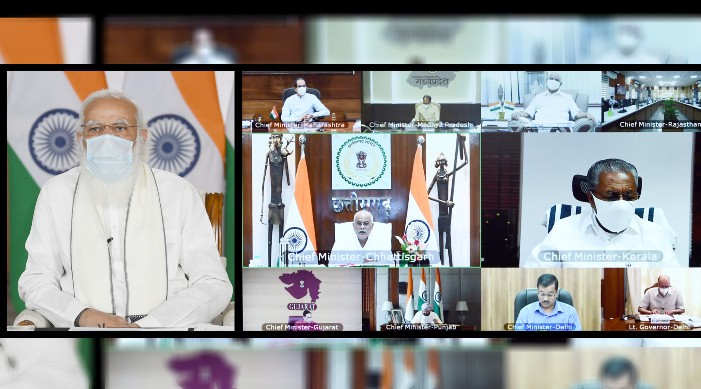 Amid the second wave of Covid-19, Prime Minister Narendra Modi on Friday called on states to work together to fight against the pandemic.

He said so while chairing a high-level meeting on Covid-19 situation with Chief Ministers of 11 states and Union Territories which have reported the maximum number of cases recently.

He said the biggest basis of India’s success during the first wave of the pandemic was our united efforts and united strategy and reiterated that we will have to address this challenge in the same way.

He assured the Centre's full support to all the states and in this fight. He added that the Ministry of Health is also in touch with the states and is monitoring the situation closely and issuing necessary advice to the states from time to time.

On oxygen supply, PM Modi took note of the points raised by the states. He said there is a continuous effort to increase oxygen supply. All the concerned departments and ministries of the government are also working together. Industrial oxygen has also been diverted to meet immediate requirements.

He urged all states to work together and coordinate with one-another to fulfill requirements relating to medicines and oxygen. Further, he urged the states to check hoarding and black marketing of oxygen and medicines.

The Prime Minister said that every state should ensure that no oxygen tanker, whether it is meant for any state, is stopped or gets stranded.

The Prime Minister informed the Chief Ministers that yesterday he chaired a meeting on oxygen supply and will be attending one today to discuss all the options for increasing the oxygen supply.

PM Modi stated that the central government is working on all possible options to reduce the travel time and turnaround time of oxygen tankers. For this, Railways has started Oxygen Express. Empty Oxygen tankers are also being transported by the Air-Force to reduce one way travel time.

The Prime Minister said that along with upgrading of resources, we have to focus on testing. He emphasized that widespread testing should be conducted so that people get the facility easily.

The campaign launched by the Central Government to provide free vaccines to all citizens above 45 years as well as Health-Care workers and Front-Line workers, will also continue in the same manner.

From May 1, PM Modi added, the vaccine is going to be available to all citizens above 18 years of age. We will also need to work in mission mode to get more and more people vaccinated.

PM Modi said along with all measures for treatment of the patients, hospital safety is also very important.

Expressing grief on recent incidents of oxygen leakage and fire at hospitals, PM Modi said the administrative staff of the hospital needs to be made more aware about the safety protocols.

PM Modi also urged the administration to continuously make people aware so that they do not indulge in panic buying. He said that with united efforts, we will be able to stop this second wave of the pandemic across the country.

Earlier, a presentation was given by Member, NITI Aayog VK Paul, which highlighted the preparations being done to counter the new surge of infections. Paul also presented the roadmap for increasing the medical facilities and targeted treatment of patients.

He briefed everyone about Boosting of Medical infrastructure, teams and supplies; Clinical Management; Containment; Vaccination and Community engagement.

During the interaction, Chief Ministers of states briefed the Prime Minister about the steps being taken by respective State Governments in the current wave. They also noted that the directions given by the PM and the road map presented by NITI would help them plan their responses in a better way.

Creating a world record of the highest single-day surge, India recorded 3,14,835 fresh coronavirus infections, pushing the cumulative tally to 1,59,30,965 on Thursday, as per data by the Health Ministry.