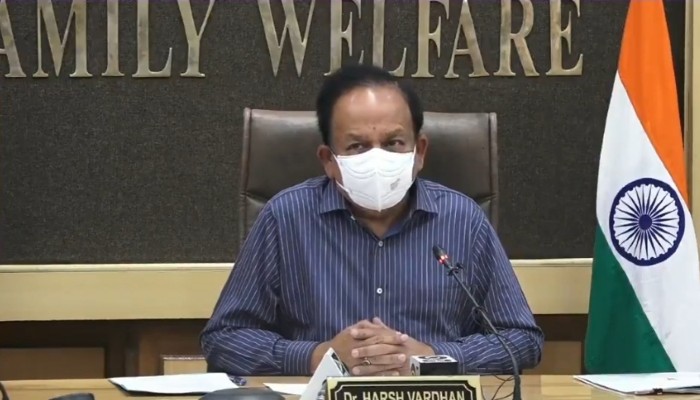 Union Health Minister Harsh Vardhan on Wednesday hit out at some states for demanding Covid-19 vaccine age relaxation, and called it a deplorable attempt to distract attention.

These were "deplorable attempts by some state governments to distract attention from their failures and spread panic among the people," he said in a statement issued on Wednesday.

In particular, the Union Minister said that the Maharashtra government had indulged in spreading panic about the shortage of vaccines.

“This is nothing but an attempt to divert attention from Maharashtra government’s repeated failures to control the spread of pandemic. The inability of the Maharashtra government to act responsibly is beyond comprehension. To spread panic among the people is to compound the folly further. Vaccine supplies are being monitored on a real-time basis, and State governments are being appraised regularly about it. Allegations of vaccine shortage are utterly baseless,” Harsh Vardhan said.

“Maharashtra Government needs to do a lot more to control the pandemic and the Central Government will help them in all possible ways. But focusing all their energies on playing politics and spreading lies to create panic is not going to help the people of Maharashtra,” he added.

Similarly, the Minister said that regular comments have been made by leaders from Chhattisgarh intended to spread misinformation and panic.

“I would like to humbly state that it would be better if the state government focuses its energies on ramping up their health infrastructure rather than on petty politicking. Chhattisgarh has seen a disproportionately higher number of deaths in the last 2-3 weeks. Their testing remains heavily dependent on rapid antigen tests which is not a wise strategy,” he said.

Harsh Vardhan noted that the Chhattisgarh Government refused to use Covaxin despite it being given Emergency Use Authorization (EUA) by the Drug Controller of India.

“Not only this, by its actions, the leaders of the state government have the dubious distinction of being perhaps the only government in the world to have incited vaccine hesitancy,” he added.
Further he said that many other States also need to bring their healthcare systems up to the mark.

“For example, quality of testing needs to improve in Karnataka, Rajasthan and Gujarat. In Punjab, high Case Fatality Rate needs to be improved by early identification of those needing hospitalization. Mask-wearing and social distancing compliance are slack in a large number of States. There is a lot that needs to be done, and we must do it all with speed and at scale,” the Minister said.

Harsh Vardhan had earlier said one of the major reasons for the surge in cases was people becoming lax towards following COVID-appropriate behaviour and urged them take up mass awareness campaigns to re-instill the importance of such measures among the masses.

Vardhan, who reviewed the Covid-19 situation and progress of vaccination with the Health Ministers of Chhattisgarh, Delhi, Gujarat, Haryana, Himachal Pradesh, Jharkhand, Karnataka, Madhya Pradesh, Maharashtra, Punjab and Rajasthan, said these 11 states together contributed 54 per cent of the total cases and 65 percent of the total deaths in the country, with a disproportionately high number of deaths in Maharashtra and Punjab.