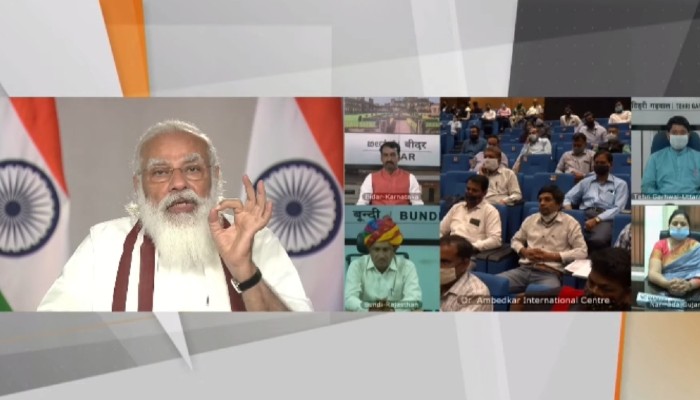 A landmark Memorandum of Agreement (MoA) was signed between the Union Minister of Jal Shakti and the Chief Ministers of Madhya Pradesh and Uttar Pradesh to implement the Ken Betwa Link Project, the first project of the National Perspective Plan for interlinking of rivers.

The MoA was signed on Monday, in the presence of Prime Minister Narendra Modi who joined via video conferencing.

Speaking on the occasion, which also marked International Water Day, Prime Minister Modi said the project, conceived by former Prime Minister Atal Bihari Vajpayee, was in the interest of millions of families of Uttar Pradesh and Madhya Pradesh.

Explaining that rapid development was not possible without water security and effective water management, he pointed out that the vision of India's development and India's self-reliance was dependent on its water sources and water connectivity.

Interlinking of rivers will help carry water from areas that have surplus water to drought prone and water deficit areas.

The Ministry of Jal Shakti had earlier said that this project involves transfer of water from the Ken to the Betwa River through the construction of Daudhan Dam and a canal linking the two rivers, the Lower Orr Project, Kotha Barrage and Bina Complex Multipurpose Project.

It will provide annual irrigation of 10.62 lakh ha, drinking water supply to about 62 lakh people and also generate 103 MW of hydropower.

The project will be of immense benefit to the water starved region of Bundelkhand, especially to the districts of Panna, Tikamgarh, Chhatarpur, Sagar, Damoh, Datia, Vidisha, Shivpuri and Raisen of Madhya Pradesh and Banda, Mahoba, Jhansi and Lalitpur of Uttar Pradesh.

Prime Minister Modi also launched the ‘Jal Shakti Abhiyan:Catch the Rain’ campaign which will run till November 30, covering the pre-monsoon and monsoon periods in the country.

Launched as a Jan Andolan (peoples movement) to take water conservation at grass-root level through people’s participation, it is intended to nudge all stakeholders to create rainwater harvesting structures to ensure proper storage of rainwater.

The Prime Minister pointed out that the better India manages rainwater, the lesser the country's dependence on groundwater. Therefore, the success of campaigns like 'Catch the Rain' was very important, he said.

The ‘Jal Shakti Abhiyan: Catch the Rain’ campaign will be undertaken across the country, in both rural and urban areas.

The theme of the campaign is “Catch the rain, where it falls, when it falls.

The Prime Minister remarked that for the first time after independence, a government was working so seriously with regard to water testing.

During the Corona period itself, about 4.5 lakh women were trained for water testing, he pointed out.