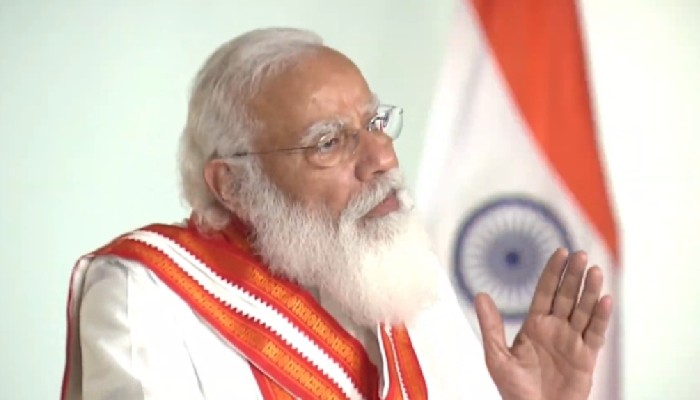 Prime Minister Narendra Modi will flag off the march from Sabarmati Ashram.

Prime Minister Narendra Modi will flag off the ‘Padyatra’ (Freedom March) from Sabarmati Ashram, Ahmedabad on Friday and inaugurate the curtain raiser activities of the ‘Azadi Ka Amrut Mahotsav’ (India@75).

This comes 75 weeks prior to the country completing 75 years of Independence.
The Prime Minister will also launch various other cultural and digital initiatives for the India@75 celebrations and will address the gathering at Sabarmati Ashram.

Gujarat Governor Acharya Devvrat, Union Minister of State for Tourism Prahalad Singh Patel and Gujarat Chief Minister Vijay Rupani will also be present for the event, scheduled to commence at 10:30 am.

Azadi Ka Amrut Mahotsav is a series of events to be organised by the Government of India to commemorate the 75th Anniversary of India’s Independence. The Mahotsav will be celebrated as a Jan-Utsav in the spirit of Jan-Bhagidari.

A National Implementation Committee headed by the Home Minister has been constituted to chalk out policies and planning of various events to be undertaken under the Commemoration. The curtain raiser activities are beginning from 12th March.

The Padyatra will be undertaken by 81 marchers from Sabarmati Ashram in Ahmedabad to Dandi in Navsari, a journey of 241 miles that will end on 5th April, lasting for 25 days.

It will be joined by different groups of people on the way to Dandi. Union Minister Prahalad Singh Patel will lead the first lap of 75 kilometers of the padyatra
Curtain raiser initiatives under India@75
The event will witness the inauguration of the curtain raiser activities planned under the theme India@75 like a film, website, song, Aatmanirbhar Charkha and Aatmanirbhar Incubator.

Along with the above initiatives, a cultural program presenting the celebration of the indomitable spirit of the country will also be organized. It will include music, dance, recitation, reading of the Preamble (each line in a different language, representing the different regions of the country). Depicting the youth power, as the future of India there will be 75 voices in the choir as well as 75 dancers in the event.

State and Union Territories’ Governments are also organizing programs all over India on 12th March. In addition to these programs, The Archaeological Survey of India and Zonal Cultural Centres under the Ministry of Culture, Ministry of Youth Affairs and TRIFED have planned various activities to mark the occasion.