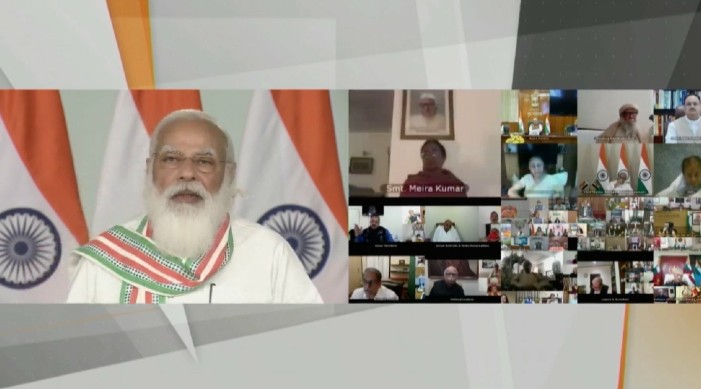 PM Narendra Modi addresses the first meeting of the National Committee to plan the celebrations.

Listing 5 Pillars for the celebrations of the 75th year of India's Independence, Prime Minister Narendra Modi on Monday said these should showcase the Freedom Struggle, Ideas at 75, Achievements at 75, Actions at 75 and Resolve at 75.

Addressing the first meeting of the National Committee that has been set up to plan events to commemorate the year, Prime Minister Narendra Modi said the celebrations should include the ideas and feelings of the country's 130 crore people.

The 259-member National Committee, headed by Prime Minister Modi, will formulate the policy and guidelines for national and international celebrations of the 75th year of India's Independence, Azadi Ka Amrit Mahotsav.

The celebrations are proposed to be launched 75 weeks prior to August 15, 2022 i.e. on March 12, 2021, which is the 91st anniversary of the historic Salt Satyagraha led by Mahatma Gandhi.

According to the Prime Minister, the celebrations should embody the glimpse of the glory of Sanatan Bharat and also the glow of modern India and the achievements of 75 years.

He said this event would showcase the achievements of the last 75 years to the world and also give a framework for resolution to the country for the next 25 years.

He also emphasized the need to honour and take the stories of lesser known freedom fighters to people and noted that every nook and corner of the country was replete with stories of sacrifice.

These stories would be an eternal source of inspiration for the nation, he said.

Addressing the meeting, Prime Minister Modi said that the country would celebrate the 7th year of Independence with grandeur and enthusiasm befitting the historic nature, glory and importance of the occasion.