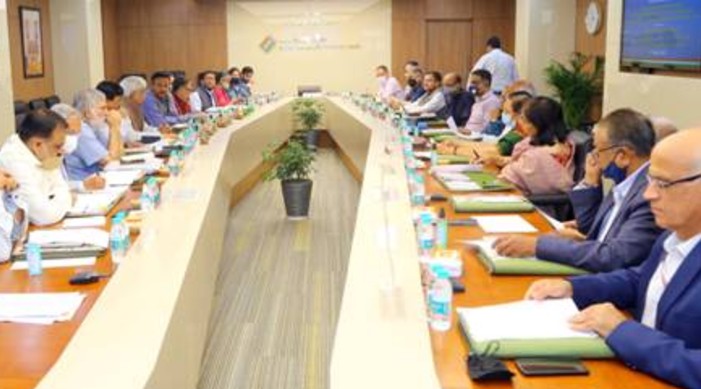 Special Observers for the Assembly polls attend a briefing by the Election Commission of India.

The Election Commission of India (ECI) is gearing up for the State Assembly Elections which will be held in West Bengal, Assam, Tamil Nadu, Kerala, and Puducherry between March 27 and April 6.

Over the past few days, it has held a series of meetings with Observers for these polls.

According to the Commission, the Special Observers will be visiting their assigned States and Union Territories (UTs) and superintend and monitor poll preparedness being done by State and district level officials.

"They will also have series of meetings with the General, Police and Expenditure Observers deployed in the field," the ECI said after the meeting.

It had organised a detailed briefing for more than 1,650 General, Police and Expenditure Observers a day earlier.

They participated in the briefing meeting physically and virtually from more than 120 remote locations also.

During these elections, these Observers will play an additional role in the randomization of forces and its deployment, the commission said.

CEC Arora also asked the Observers to visit the Polling Booths to check due facilitation to senior citizens, Persons with Disabilities and women voters to ensure the poll panel's commitment to the principle of Inclusive Elections.

According to the Election Commission, more than 18 crore voters would be exercising their right of franchise. Keeping social distancing norms in mind, more than 80,000 polling stations have been added for the assembly elections.

Guidelines for COVID-safe election also include thermal scanning of all persons, sanitizer and mask use; larger halls with adequate spacing of counting tables; vaccination for all personnel involved in the electoral process.

ECI has provided the option of Postal Ballot facility to the electors who are marked as Persons with Disabilities (PwD), electors above the age of 80 years, electors employed in notified Essential services and electors who are COVID- 19 positive/suspect as certified by competent authority and are in quarantine (home/institutional).

According to the poll schedule, West Bengal will see elections in eight phases from March 27 to April 29, whileTamil Nadu, Kerala, and Puducherrry will vote for all the assembly seats on April 6.

Assam will see a three-phase election between beginning March 27.

Results for all the 2021 State Assembly Elections will be announced on May 2.

Tamil Nadu will see voting in 234 constituencies while Kerala has 140 Assembly seats.

In Puducherry, elections will be held for 30 seats.