Many who are spreading terror and violence across world are highly educated, highly skilled: PM Modi 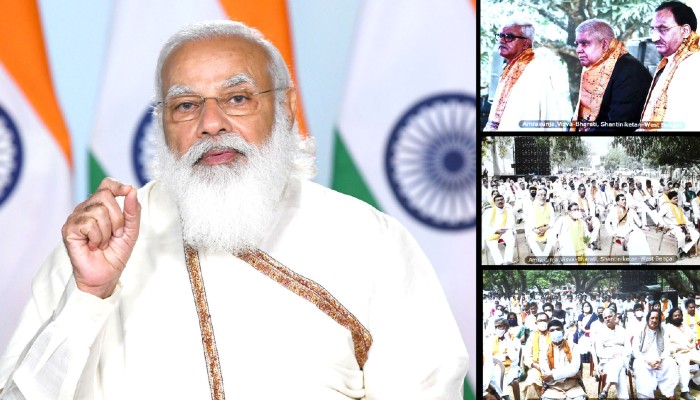 Students need to decide whether they want to be part of the problem or the solution, PM Modi said

While addressing the students at the convocation ceremony of Santiniketan-based Visva-Bharati University through video conference, Prime Minister Narendra Modi on Friday said many who are spreading terror and violence across the world are highly educated and highly skilled.

“On the other hand there are people who are risking their lives and stationed at hospitals and labs to save people from a pandemic like COVID,” the Prime Minister said, maintaining that “this is not about ideology but mindset, whether it is positive or negative. There is scope for both and paths are open for both.”

“Your knowledge and skill can make a nation proud or can push society into the darkness of slander and ruin,” Prime Minister Modi maintained.

He urged students to decide whether they want to be part of the problem or the solution. He added if they put the nation first then their every decision will move towards some solution. He advised the students not to be afraid of taking a decision.

He said as long as the youth of the country have the passion to innovate, take risks and move forward then there is no worry about the future of the country. He assured the Government’s support for the youth in this endeavour.

The Prime Minister said, as per the year 1820 survey, there were more than one gurukul in every village which was linked with the local temples and literacy rate was estimated to be very high. This was recognized by the British scholars also.

Modi said Gurudev Ravindranath developed systems in Visva Bharti which were the medium of modernising Indian education and freeing it from the shackles of slavery.

Similarly, the new National Education Policy also breaks old restrictions and allows students to realize their full potential, the Prime Minister said. Talking about the NEP, he said allows flexibility in selection of subjects and medium of instruction.

The policy promotes entrepreneurship and self-employment; research and innovation. ‘This education policy is a major milestone in the making of an 'Aatmnirbhar Bharat’, said the Prime Minister.

The Prime Minister informed that scholars have recently been given free access to lakhs of journals by the Government. This year’s budget has proposed 50 thousand crore in 5 years for research through the National Research Foundation.

This Education Policy has made provision for the Gender Inclusion Fund that will give the girls new confidence. Higher dropout rate of girls was deeply studied and arrangements were made for entry-exit options and yearly credit in the degree courses.

Calling Bengal inspiration for ‘Ek Bharat-Shreshth Bharat’, the Prime Minister said that Visva Bharati will play a big role in the 21st century knowledge economy, taking Indian knowledge and identity to every corner of the world.

Modi called upon the students of this prestigious institute to prepare a vision document for next 25 years about the 25 biggest goals of Visva Bharati in 2047.