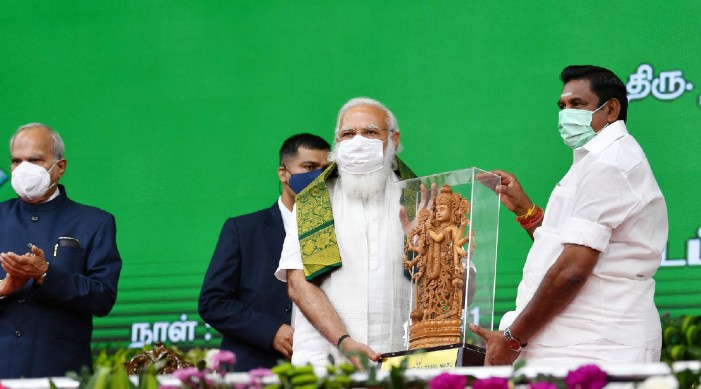 “World is looking at India with great enthusiasm and positivity,” PM Modi

Prime Minister Narendra Modi on Sunday said India is scaling up on physical and social infrastructure at a rapid pace.

“Today, India has one of the biggest infra drives in the world. Just recently we have begun the movement to connect all our villages with internet connectivity. Similarly, India has the largest healthcare programme in the world. India is also transforming the education sector with importance given to out-of-the-box learning and technology. These developments will bring countless opportunities for the youth,” the Prime Minister said while inaugurating/ laying the foundation stone of various projects in Chennai in Tamil Nadu.

Highlighting the proposed Discovery Campus at IIT Madras, he said it will have a two-lakh square metre infrastructure to house world-class research centres.

“I am sure that very soon, the Discovery Campus of IIT Madras will be a leading centre of discovery. It will draw the best talent from all over India,” the Prime Minister said.

He added the world is looking at India with great enthusiasm and positivity.

“This is going to be India’s decade. And, this is because of the hard work and sweat of 130 crore Indians. The Government of India is committed to doing everything possible to support this surge of aspiration and innovation. This year’s Budget has once again showcased the reform commitment of the Government. It would make you happy that in this year’s Budget, special importance has been given to the development of India’s coastal areas,” the Prime Minister maintained.

Talking about the phase one of Chennai Metro Rail, covering nine kilometre stretch from Washermenpet to Wimco Nagar, he said this project has been completed on schedule, despite the global pandemic.

“The civil construction activities were done by Indian Contractors. The Rolling stock has been procured locally. This is in line with the boost to Aatmanirbhar Bharat. The Chennai Metro is growing rapidly. In this year’s budget, over Rs 63,000 crore have been set aside for a hundred and nineteen kilometres of phase two of the project. This is one of the largest projects sanctioned for any city in one-go. The focus on urban transport will boost ‘Ease of Living’ for citizens here,” Prime Minister Modi said.

The Prime Minister who laid the foundation stone for the modernization of the 636-km long Grant Anicut Canal System in the city, said the impact of this move is going to be very big.

“It will improve irrigation facilities for 2.27 lakh acres of land. Districts of Thanjavur and Pudukkottai will gain specially. I want to appreciate the farmers of Tamil Nadu for record food grain production and good use of water resources. For thousands of years, this Grand Anicut and its canal systems have been the life-line of the rice bowl of Tamil Nadu.The Grand Anicut is a living testimony to our glorious past. It is also an inspiration to our nation’s “Aatmanirbhar Bharat” goals,” the Prime Minister maintained.