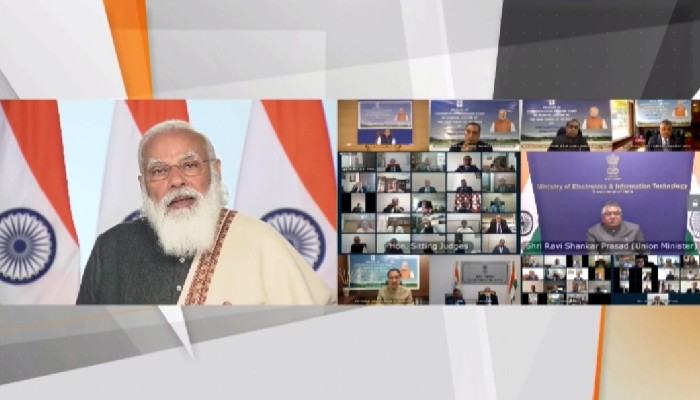 Rule of law in Indian society has been the basis of civilization for centuries, Prime Minister Narendra Modi said

“Judiciary has always strengthened the Constitution by creatively and positively interpreting it. It has served the Rule of Law by meeting its role in the fields of rights and freedom of the citizens,” said Prime Minister Narendra Modi addressing the Diamond Jubilee of the High Court of Gujarat, through video conferencing today.

The Prime Minister asserted that the judiciary has fulfilled its responsibility as the life force of the Constitution.

Speaking on the occasion, the Prime Minister praised the Bench and the Bar of the High Court for their erudite contribution for strengthening Indian judicial system and Indian democracy over the period of 60 years.

"I want to congratulate Gujarat High Court for always working towards securing truth and justice in the country. In the past years, Gujarat HC and the Bar have carved a distinctive identity with their legal understanding, scholarship and intellectualism," he said.

The duty and devotion with which the Gujarat High Court has acted for justice, the readiness for its constitutional duties has strengthened both the Indian judicial system and India's democracy, the Prime Minister stated.

"Rule of law in Indian society has been the basis of civilization for centuries. Our ancient texts say the root of good governance lies in providing justice. The Bar and judiciary should work towards building the world-class Judicious System in the country," he added.

The Prime Minister also lauded the role of the Bar in meeting the fundamental goals of justice. He emphasized that it is the responsibility of both the executive and judiciary to establish a world-class judicial system that provides guarantee of timely justice to the person at the lowest rung of the society.

Even during the time of the pandemic, the judiciary worked with dedication. The Gujarat High Court showed its adaptive capability by early start of hearing by video conferencing, SMS call-out, e-filing of cases and ‘email my case status’, he said.

The court also started streaming of its display board on YouTube and uploaded its judgments and orders on the website. The Gujarat High Court became the first court to stream the court proceeding live.

The Prime Minister expressed satisfaction that digital infrastructure put in place by the Law Ministry’s e-Courts Integrated Mission Mode Project has been adopted so quickly by the courts.

Further, he informed more than 18 thousand courts have been computerized and there is a new momentum in e-proceedings in court after the Supreme Court giving legal sanctity to tele-conferencing and video conferencing.

“It is a matter of great pride that our Supreme Court has heard the greatest number of cases via video conferencing among all the Supreme Courts of the world” said the Prime Minister.

Ease of Justice got a new dimension by e-filing of cases, Unique Identification Code and QR code for cases, which led to the setting up of the National Judicial Data Grid. The Grid will help lawyers and litigants to know about their cases.

This ease of justice is enhancing not only the ease of living but also the ease of doing business as foreign investors are feeling more confident about the safety of their judicial rights. The World Bank has also praised the National Judicial Data Grid. The E-Committee of The Supreme Court and NIC are creating safe cloud-based infrastructure.

The Prime Minister informed that possibilities of use of artificial intelligence are being explored to make our system future ready. This will increase the efficiency and speed of the judiciary.

He said that Atmanirbhar Abhiyan will play a big role in the efforts of judicial modernization. Under the Abhiyan, India is promoting its own video conference platform. E-Seva Kendras in High Courts and district courts are helping in bridging the digital divide.

“Today, e-lok adalats have become source of timely and convenient justice as lakhs of cases have been heard in 24 states. This speed, trust and convenience is the demand of today’s judicial system”, said the Prime Minister.