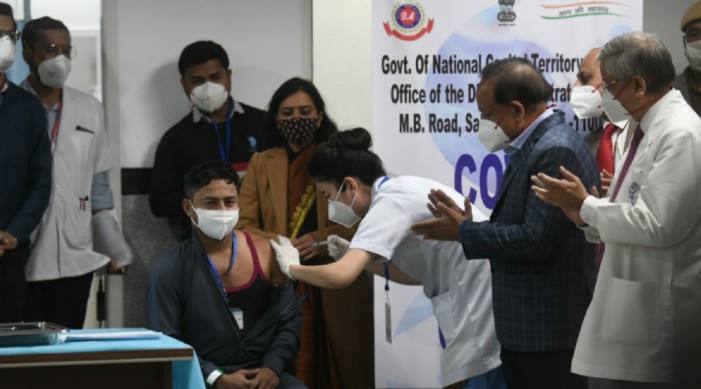 India was vaccinating people faster than anywhere in the world 's and its COVID-19 vaccination programme was turning out to be exemplary to the world, Prime Minister Narendra Modi said on Sunday.

Referring to the ongoing vaccination drive and the fight against COVID-19 during his monthly Man ki Baat broadcast, he said the beginning of this year marked the completion of almost one year of India's battle against Corona.

"Just as India’s fight against Corona became an example, our vaccination Programme too is turning out to be exemplary to the world. Today, India is undertaking the world’s biggest Covid Vaccine Programme," he said.

Prime Minister Modi pointed out that India was vaccinating people faster than anywhere in the world. India has vaccinated over 30 lakh (3 million) Corona Warriors in just 15 days, whereas the United States took 18 days for this and the United Kingdom 36 days, he said.

"Today, the Made in India vaccine is, of course, a symbol of India’s self-reliance; it is also a symbol of her self-pride," the Prime Minister said.

A total of 37.44 lakh (3.74 million) have received the vaccination under the countrywide COVID-19 vaccination exercise till 8 am on Sunday, according to figures released by the Ministry of Health and Family Welfare.

Over 63.34% of the total vaccinated beneficiaries are from eight States.

Uttar Pradesh continued to lead the list of states with the maximum vaccinations with the figure standing at 4,63,793. It was followed by Rajasthan with 3,29,611 vaccine shots and Karnataka with 3,15,370 vaccinations.

As per data till January 29, India is at the fifth position globally in terms of the number of vaccine doses administered within the country. "This is despite the fact that many countries had initiated their vaccination campaign before India," the health ministry said.