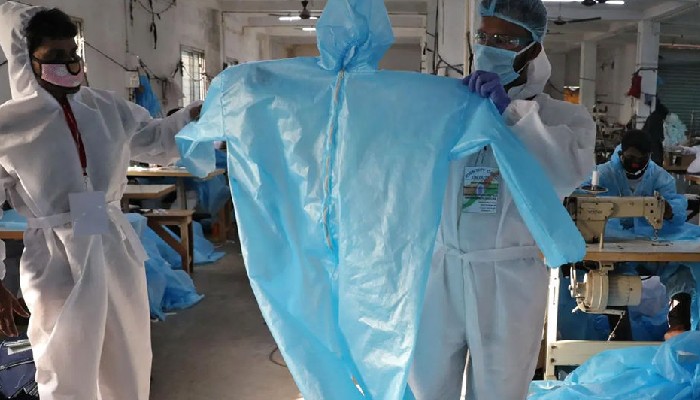 India has emerged as the second largest PPE manufacturer in the world, producing 4.5 lakh PPE kits per day. The PPE industry is worth Rs 7000 crore with 1100 manufacturers involved in the production of kits, the Ministry of Textile said in a statement on Wednesday.

PPE kits are used by the health workers as the first line of defence against infectious diseases like Covid-19. As the Covid-19 pandemic worsened, the production was ramped up in March, India was producing 10 million PPE kits a month on the specs that were demanded by the Central government to fight the coronavirus pandemic.

The Central government had placed an order for 22 million PPEs in March to meet the demand for health workers. To meet the need of states in India, export of kits and other protective equipment were banned too in the month of March.

The export of 500,000 PPE kits monthly was allowed in the month of July by the ministry. India exported 2,300,000 PPE kits to five countries, as it had started producing surplus kits.

The PPE production came as a boost for the textile industry as it faced nearly 84 percent fall in apparel sales and an acute shortage of labour due to the pandemic in the first quarter.

Overall, the textile industry occupies an important position in our country. Indian Textile sector is the sixth largest exporter of textiles and apparels in the world. Its share in mercantile exports is 12 per cent and is the second largest employment generator after agriculture. The Ministry of Textiles undertook various initiatives to boost India’s growth in the textile sector in 2020.