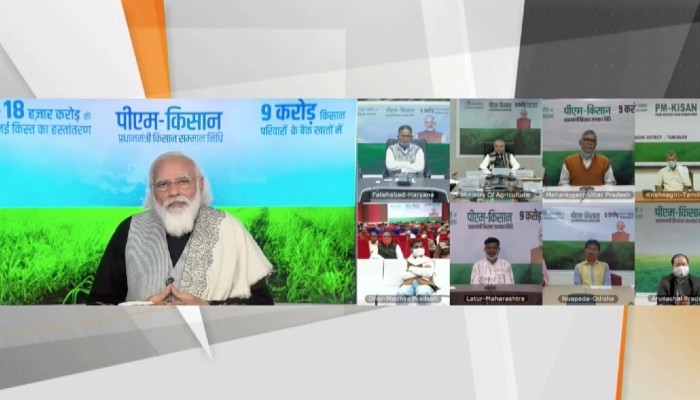 Addressing over nine crore farmers via video conferencing, the Prime Minister said Rs 18,000 crore have been deposited directly in the bank account of more than 9 crore farmer families in the country at the click of a button today. He added ever since this scheme started, more than 1 lakh 10 thousand crore rupees have reached the account of farmers.

Under the PM-KISAN scheme, a financial benefit of Rs 6,000 per year is provided to small and marginal farmers, payable in three equal installments of Rs 2,000 each. The fund is transferred directly to the bank accounts of the beneficiaries.

The virtual event was held amid the ongoing protest by thousands of farmers over the new farm laws.

In this context, the Prime Minister said the government tried to ensure that the country's farmers get a fair price for the crop. He said the Government fixed one and a half times the production cost as MSP for the farmers as per the recommendations of the long-standing Swaminathan Committee report. He added the number of crops for which Minimum Support Price (MSP) is available was also increased.

He further said that the government aimed to open new markets for the farmers to sell their crops. He said the government added more than a thousand agricultural mandis of the country online. Among these, more than Rs. one lakh crore have been traded.

PM Modi said the Government worked towards forming groups of small farmers so that they can work as a collective force in their region.

He noted the reforms that have been taken to benefit the farmers including getting a pucca house, toilet, and clean piped drinking water. They have benefited greatly from the free electricity connection, free gas connection, he said. He further noted free treatment up to Rs. 5 lakh under the Ayushman Bharat scheme has reduced the major concern of the lives of farmers.

He said investment and innovation have improved in other sectors, the income was enhanced and Brand India was established in that sector. He said now the time has come for Brand India to establish itself in the agricultural markets of the world with equal prestige.

In his concluding remarks, the Prime Minister thanked all the farmers across the country who have fully supported and welcomed the agricultural reforms and assured them that he will not let them down. He said people mainly from the rural areas, participated in the recently held local body elections in Assam, Rajasthan, Jammu, and Kashmir and in a way, rejected all the parties that misled farmers.