Tagore’s vision for Vishwa Bharati is the essence of self-reliant India: PM Modi 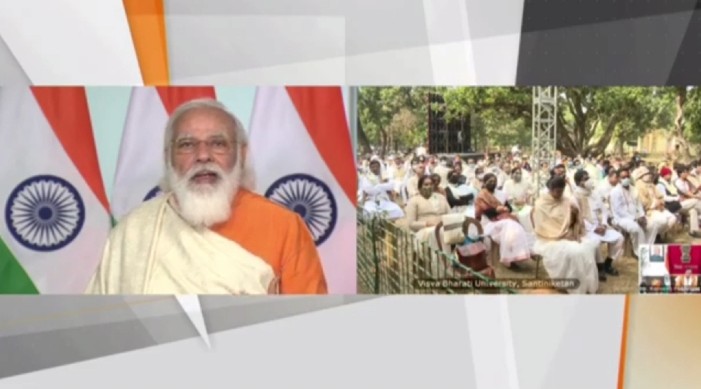 Prime Minister Narendra Modi has said that Visva Bharati is the true embodiment of Gurudev Rabindranath Tagore's vision and hard work for the country. His vision for Visva Bharati is also the essence of self-reliant India, PM Modi said.

Speaking at the centenary celebrations of Visva Bharati University, Santiniketan,he said that Atmanirbhar Bharat is a campaign to empower India and to bring prosperity to the world.

"Guided by Gurudev, Visva-Bharati presented a strong image of Indian nationalist sentiment during Independence. Gurudev wanted the entire humanity to benefit from India's spiritual awakening. Atmanirbhar Bharat vision is also a derivative of this sentiment," he said.

Recalling the independence movement and the contribution of the freedom fighters, PM Modi said, "We must take inspiration from all those who have contributed to making India great over the centuries and millennia. We must also keep in mind the India that our freedom fighters envisioned when they fought for our independence which is why we must create an Atmanirbhar Bharat.”

Speaking about the university, PM Modi said that Visva-Bharati's hundred-year journey is very special and a matter of pride for every Indian. The PM pointed out that the university was a venerable source of constant energy to the country and the ideas that originated there were being carried forward by the nation in the international sphere.

He said the University is a true embodiment of Gurudev's contemplation, vision, and hard work for Mother Bharati. He expressed happiness that Visva-Bharati, Shriniketan, and Santiniketan are continually striving to achieve the goals that Gurudev had set.

The Prime Minister remarked that our country is spreading the message emanating from Visva-Bharati to the whole world. He added, India today is leading the world in environmental protection through the International Solar Alliance. He said India is the only major country on the right path to achieve the environmental goals of the Paris Accord.