'Government committed to development without discrimination, country's resources belong to all': PM Modi 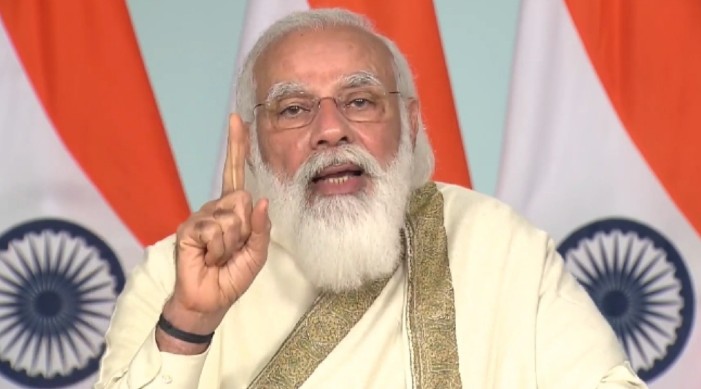 No one should be left behind due one’s religion, Prime Minister Modi has said

Emphasizing that the vision of new India envisages that the development of the nation and society should not be seen from a political angle, Prime Minister Narendra Modi has said that the government's welfare schemes provide benefits "without any discrimination".

Addressing the Centenary Celebrations of the Aligarh Muslim University (AMU) on Tuesday, Prime Minister Modi said every citizen was assured of the rights given by the Constitution.

"No one should be left behind due one’s religion and this is the basis of the pledge ‘sabka saath, sabka vikas, sabk viswas’," he explained.

He added that about 50 crore people have availed free treatment up to Rs 5 lakh under Ayushman scheme without any discrimination.

“Country’s resources belong to each and every citizen and should benefit all. Our government is working with this understanding” said Prime Minister Modi.

During his address, he made a special mention of how the government was very focused on the education of Muslim daughters and their empowerment.

In this context, he recalled the time when the drop-out rate of Muslim girl students was more than 70 per cent, due to the lack of toilets. The government built separate toilets for the school-going girl students in mission mode under the Swachh Bharat Mission. This had brought down the school drop-out rate of Muslim girls to about 30 percent, Prime Minister Modi said.

He pointed out that nearly one crore Muslim girls and women had been given scholarships by the government in the last six years. "There should be no discrimination on the basis of gender, everyone should get equal rights, everyone should get the benefit of development of the country," he stressed.

The Prime Minister also noted how efforts to build "a modern Muslim society" had been taken forward by ending the practice of Triple Talaq.

The Prime Minister also released a commemorative stamp to mark the occasion.