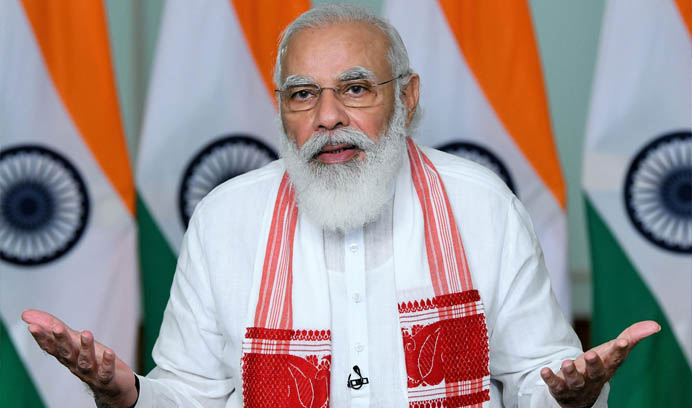 Prime Minister Narendra Modi on Monday proposed creation of a library of traditional Buddhist literature and scriptures in India.

“We will be happy to create such a facility in India and will provide appropriate resources for it. The library will collect digital copies of all such Buddhist literature from different countries. It will aim to translate them, and make them freely available for all monks and scholars of Buddhism. The library will be a depository of literature,” Prime Minister Modi said in his message at India-Japan Samvad Conference.

In 2015, Prime Minister Modi along with then Japanese counterpart Shinzo Abe had launched this series of conferences. Speaking on the occasion, the Prime Minister said the proposed library will be a platform for research and dialogue- a true ‘SAMVAD’ between human beings, between societies, and between man and nature.

“Its research mandate will also include examining how Buddha's message can guide our modern world against contemporary challenges like poverty, racism, extremism, gender discrimination, climate change and many others,” the Prime Minister said, lauding the work of ‘Samvad’ in the promotion of ideas and ideals of Lord Buddha, especially among the youth.

Stating that the essence of Samvad is togetherness, he said the governments across the world must keep “humanism” at the core of their policies. “We must make harmonious coexistence with nature as the central pillar of our existence. SAMVAD, a dialogue with ourselves, with fellow human beings, and with nature can light our way on this path.”

“Let SAMVAD bring out the best in us, together. This is the time to draw upon our ancient values and prepare for the times to come,” he added, saying historically, the light of Buddha's message spread out from India to many parts of the world. However, this light did not remain static. In each new place it reached, Buddhist thought continued to evolve further over the Centuries. Because of this, great treasures of Buddhist literature and philosophy can be found in many different monasteries today, across many different countries and languages.

Terming it as the first SAMVAD of a new decade, the Prime Minister said it is happening at a critical moment of human history.

“Our actions today will shape the discourse in the coming times. This decade and beyond will belong to those societies that place a premium on learning and innovating together. It will be about nurturing bright young minds who will add value to humanity in the times to come. Learning should be such that furthers innovation. After all, innovation is the corner-stone to human empowerment,” the Prime Minister added.

He said societies that are open minded, democratic and transparent are better suited to innovate. Therefore, now is the time, more than ever before, to change the paradigm on what we see as growth. Discussions on global growth cannot happen only between a few. The table must be bigger. The agenda must be broader. Growth patterns must follow a human-centric approach. And, be in harmony with our surroundings.