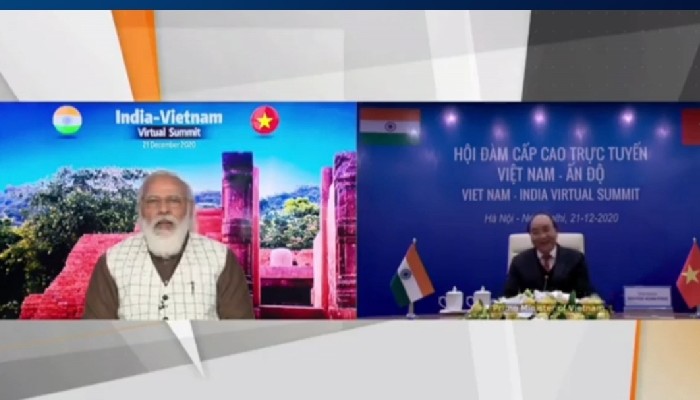 India and Vietnam have resolved to further strengthen their Comprehensive Strategic Partnership and work towards achieving a “peaceful, stable, secure, free, open, inclusive and rules-based region”.

Prime Minister Narendra Modi and Prime Minister of Vietnam Nguyen Xuan Phuc discussed the entire gamut of bilateral relations during a virtual summit on Monday, which led to the release of a Joint Vision for Peace, Prosperity and People.

Recognizing the importance of cooperation amidst the emerging geopolitical and geoeconomic landscape in the region and beyond, the leaders agreed that “enhanced defence and security partnership between India and Vietnam will be an important factor of stability in the Indo-Pacific region,” the Joint Vision statement said.

"To this end, the two sides will step up their military-to-military exchanges, training and capacity building programmes across the three services and coast guards and will intensify their defence industry collaboration building on India’s defence credit lines extended to Vietnam," the Joint Vision statement said.

Both sides will also engage more closely through institutionalized dialogue mechanisms in dealing with traditional and non-traditional security threats in cyber and maritime domains, terrorism, natural disasters, health security, water security, and transnational crimes, including through enhanced legal and judicial cooperation, where required.

The two countries have also decided to step up regular high-level exchanges to build upon the foundations of deep-rooted historical and cultural bonds, shared values and interests, mutual strategic trust and understanding and shared commitment to international law.

The “shared Vision will serve as a cornerstone for a new era of India-Vietnam Comprehensive Strategic Partnership,” the joint statement said. Concrete Plans of Action will be worked out by the two sides periodically, beginning with that for 2021-2023.

Call for Peace, Freedom of Navigation in South China Sea

Underlining the link between prosperity and security, the leaders reaffirmed the importance of maintaining peace, stability, security and freedom of navigation and overflight in the South China Sea.

The Joint Vision statement underscored the need to pursue the peaceful resolution of disputes in accordance with international law, particularly the 1982 United Nations Convention on the Law of the Sea (UNCLOS), “without resorting to threat or use of force”.

The two Prime Ministers also called for the “full and effective implementation of the Declaration on the Conduct of Parties in the South China Sea (DOC) in its entirety”.

They sought “substantive negotiations towards the early conclusion of a substantive and effective Code of Conduct in the South China Sea (COC) in accordance with international law”, especially UNCLOS, that does not prejudice the legitimate rights and interests of all nations including those not party to these negotiations.

The two sides recognized the threat to world peace and humanity from terrorism, violent extremism and radicalism and said their resolve “to combat terrorism in all its forms and manifestations, including cross-border terrorism, terror financing networks and safe havens,” will be put into action through greater coordination in bilateral, regional and global efforts.

“The two sides will step up joint efforts in building a strong consensus for early adoption of the Comprehensive Convention on International Terrorism (CCIT),” the statement said.

Firm Focus on Prosperity and People

During the talks, it was noted that the COVID-19 pandemic had brought with it new challenges as well as opportunities. “The two sides will work towards reliable, efficient and resilient supply chains, and will promote human-centric globalization,” the joint vision statement said.

It added that new horizons for partnership created by India’s goal to become a US$5 trillion economy by 2024 and Vietnam’s ambition to become a high-income economy by 2045 will be fully explored for all segments of economy, including MSMEs and farming communities of the two countries.

The two countries also decided to take steps to achieve the target of US$15 billion of trade turnover at the earliest.

They will also set higher levels of ambition for bilateral trade based on a concrete plan of action and new supply chains located in each other’s country.

It has also been decided to harness the synergies between India’s "Digital India” mission and Vietnam’s "Digital Society” vision, and deepen cooperation in peaceful uses of nuclear and space technologies.

“Reaffirming their shared commitment to sustainable development and climate action, while addressing their energy security as developing countries, both sides will partner in new and renewable energy resources, energy conservation and other climate-resilient technologies,” the joint statement said.

India and Vietnam have also agreed to commemorate and promote understanding and research of their shared cultural and civilizational heritage, including the Buddhist and Cham cultures, traditions and ancient scriptures.

Both sides will also come together to publish an ‘Encyclopaedia of India - Vietnam Cultural and Civilizational Relations’ to mark the 50th anniversary of India-Vietnam diplomatic relations in 2022.