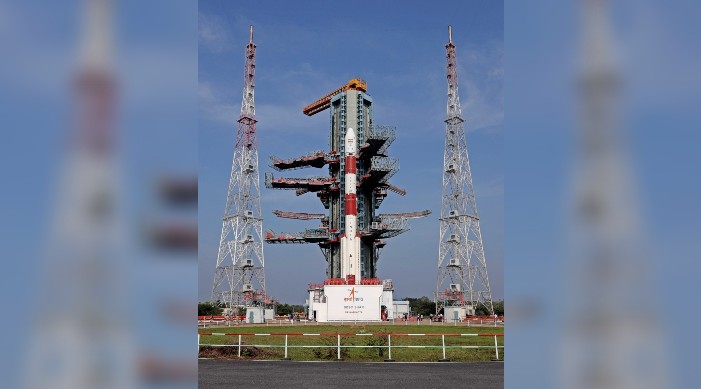 The PSLVC50 carrying the satellite at the launch pad. (Source: Twitter @isro)

In order to improve the communication services in the islands of India and to connect them to the mainland, the Indian Space Research Organisation (ISRO) is all set to launch a communications satellite CMS-01 tomorrow from the Satish Dhawan Space Centre, Sriharikota.

The 52nd Mission of PSLV, PSLV-C50 will launch CMS-01 from the Second Launch Pad (SLP) of Satish Dhawan Space Centre (SDSC) SHAR in Sriharikota tomorrow at 1541 hrs if the weather conditions remain favourable, according to ISRO.

The space agency shared the news on Twitter and said, “PSLV-C50 is scheduled to launch CMS-01, a communication satellite on December 17, 2020 from Satish Dhawan Space Centre SHAR.”


CMS-01 is the 42nd communication satellite of India and has been envisaged for providing services in Extended-C Band of the frequency spectrum.

The Extended-C Band coverage will include the Indian mainland, Andaman & Nicobar Islands and Lakshadweep. The satellite will help in improving communication services including television, tele-education, tele-medicine, and disaster management support in the islands.

CMS-01 has a mission life of seven years.

PSLV-C50 is the 22nd flight of PSLV in 'XL' configuration (with 6 strap-on motors). This will be the 77th launch vehicle mission from SDSC SHAR, Sriharikota.

Last month, ISRO had launched the PSLV-C49/EOS-01 Mission which was the 51st mission of the PSLV and the second to be undertaken in the DL configuration.

DL configuration is the one in which only two 12-metre-high strap-on boosters with 12 ton propellant load are used instead of four.

A total of nine international satellites including each from the US and Luxembourg one from Lithuania, along with EOS-01 were launched during the mission which was scheduled for earlier this year but was postponed due to COVID-19 pandemic.