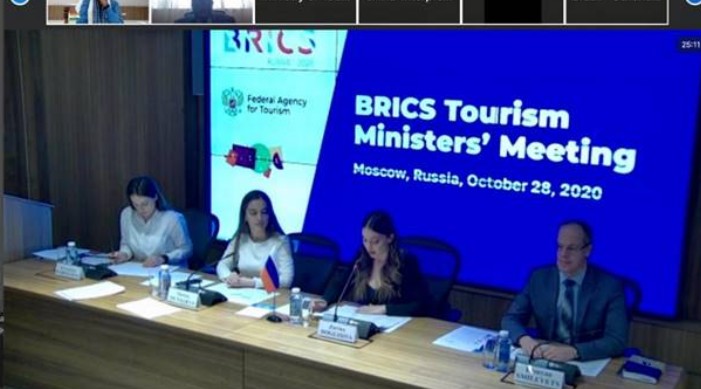 A glimpse of the virtual meeting of the BRICS Tourism Ministers (Source: PIB)

With consistent efforts, the Indian tourism sector is gradually opening up to receive visitors, Union Minister of State for Culture and Tourism Prahlad Singh Patel said at a virtual meeting of the BRICS Tourism Ministers as he expressed hope for an early revival of the global tourism sector.

At the meeting held on October 28 in a virtual format, he informed the other members of the BRICS nations that India has made air bubble arrangements with 18 countries. India has also restored existing visas for business, conference, employment, studies, research, and medical purposes. “I look forward to early revival of the global tourism sector,” he said.

Underlining the effects of COVID-19 on the tourism sector, he said that India has faced similar challenges, however, the country has taken various initiatives to overcome those.

Apart from issuing COVID-19 safety and hygiene protocols and operational guidelines for the service providers to follow, the Tourism Ministry has launched an initiative called SAATHI (System for Assessment, Awareness & Training for Hospitality Industry) to help the industry build preparedness for COVID-19 safety.

Laying emphasis on the role of digital media in promotion and spreading awareness about the tourism sector, the minister said that the government is working with the Industry in adopting digital technologies and innovation.

For instance, the Ministry of Tourism has launched the Incredible India Tourist Facilitator (IITF) Certification Programme which is a digital initiative that aims at creating an Online learning platform. The Ministry is also organizing a series of webinars under the theme Dekho Apna Desh, to showcase the diverse culture, heritage, undiscovered destinations and unusual facets of popular tourist spots to promote domestic tourism and help develop local economies, he said.

Various stimulus packages have also been announced by the Indian government for the survival and revival of the sector. Under Atmanirbhar Bharat Scheme, collateral free automatic loans have been made available for MSMEs to enable them deal with the crisis and revive the economy including the tourism sector of India, he said.

The Ministry of Tourism is also in a continuous dialogue with the representatives of Tourism & Hospitality industry stakeholders to discuss solutions and ways forward to revive the tourism economy by reviving demand, especially through promotion of Domestic Tourism to build the confidence and trust of the tourists, he said.

He lauded the Russian Federation for a successful BRICS Presidency, especially during the challenging times of COVID-19. He said that India looks forward to working together with the BRICS members and look forward to India’s Presidency in 2021 that might bring many opportunities.