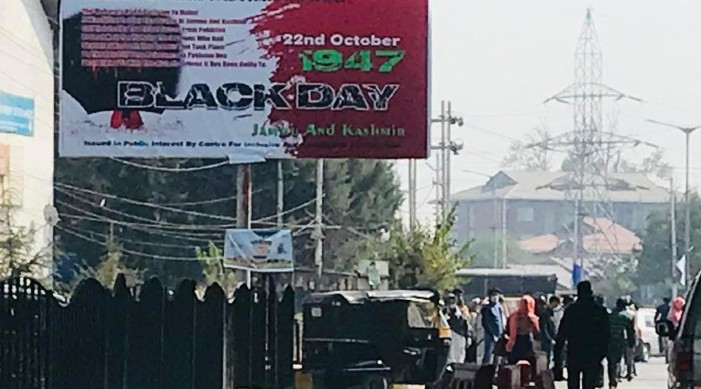 Through symposium and seminars, India wants to tell the people about brutality perpetrated on Kashmiris by Pakistan-backed militia 73 years ago

On 22nd October 1947, tribal militia backed by the Pakistan Army invaded Kashmir and unleashed a series of plunder, rape, arson, looting and killing. This day is observed as the ‘Black Day’ in the political history of India. To make youth aware of Pakistan’s perfidious attack on Jammu and Kashmir, India will organise a national symposium & exhibition on “MEMORIES OF 22 OCTOBER 1947” in Kashmir.

The two-day event will take place on October 22 and October 23 at the SKICC in Srinagar. The symposium is being organised by the National Museum Institute of History of Art, Conservation & Museology (NMI).

The Ministry of Culture in a statement has said that the symposium will be attended by Lieutenant Governor of Jammu and Kashmir, Manoj Sinha as the Chief Guest, Chief Secretary, Jammu & Kashmir, B. V. R. Subrahmanyan and the Secretary, Ministry of Culture, CEO, DMCS and VC, NMI Raghvendra Singh. Union Minister of Culture and Tourism, Prahlad Singh Patel will participate through video conferencing.

Apart from that, various prominent scholars will also be present at the event who will make various presentations on the topic. The presentations include topics such as ‘The Invasion of Jammu and Kashmir-October 1947: First Reports and People’s Response”, “Local Kashmiri Resistance to tribal Invasion of Kashmir in 1947”, “Battles for the Destiny of J&K” and “The British Role in invasion and consequent de facto partition of Maharaja Hari Singh’s erstwhile state of Jammu & Kashmir in 1947 and the impact of those actions till 2020” among others.

Various agreements following the event and the history of the event will also be shown through videos and graphics to the people.

The symposium is an effort of the central government to tell the youth of Kashmir as well as the rest of the country about the role of Pakistan in flaring the tensions in Kashmir that have followed since the event.

The Ministry in the statement said, “Evidence of the treacherous attack by Pakistan, stories of resistance and bravery of Kashmiris, narrative of Indian Army victory over the invaders need to be told to people. The two-day National Symposium on 22 & 23 Oct 2020 and the Exhibition commencing on 22 Oct 2020 is an attempt to deliberate upon the records and history of this deceitful attack and subsequent victory of India.”

Pakistan on October 22, 1947 launched ‘Operation Gulmarg,’ and invaded Kashmir after months of planning and therefore began an era of brutality. Scores of locals were subjected to plunder, rape, arson, looting and killing. It not only resulted in the first Indo-Pak war but also gave birth to several problems that affect India even today.

However, Jammu and Kashmir formally became a part of India on October 26 1947, many lives were lost and people were traumatized. Amid this, Pakistan Occupied Kashmir remains to be a bone of contention between the two nations.

Within limited resources, India has tried to walk the talk in tackling pandemic: PM Modi

Mankind will not defeat the pandemic unless everyone comes out of it, said the Prime Minister