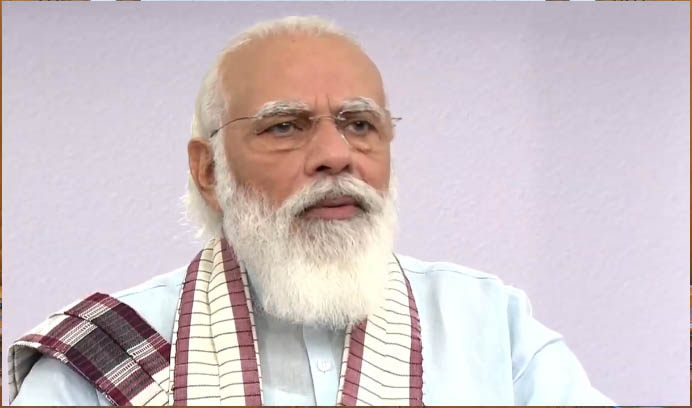 People have to take all precautions till vaccines become available, PM Narendra Modi said in an address to the nation

The lockdown may be over but people should not forget that the virus that causes COVID-19 still persists, Prime Minister Narendra Modi said in an address to the nation on Tuesday.

Those who are negligent by not wearing face masks and following all precautions were putting the lives of others at risk, the Prime Minister said, exhorting people to exercise caution till a vaccine was developed.

"In this festive season, markets are bright again but we need to remember that the lockdown might have ended but COVID 19 still persists," he said.

The Prime Minister's address came amid the ongoing festive season, with health experts warning that there could be a surge in cases if people did not follow guidelines like social distancing and wearing masks in public.

All countries were working on a war-footing to develop COVID-19 vaccines. The government is preparing to make the vaccine accessible to every Indian as soon as it is made available, PM Modi said.

People had come together in the fight against COVID-19, from the Janata Curfew till now, he pointed out.

Providing figures to show how prepared India was in the fight against the pandemic, he said the country had a facility of more than 90 lakh beds for COVID 19 patients. There are 12,000 quarantine centres and nearly 2,000 testing labs. The total number of tests that have been conducted will cross 10 crores soon.

But warning that there was no room for complacency, he pointed out to recent photos & videos where it is clearly seen that people are not being careful anymore. "If you step out without a mask, you put your families, children and elders at risk.

Referring to the situation in countries like the US, Brazil and European nations, he pointed out that they had seen a decline in cases but are now witnessing a sudden and worrying increase.

In a late-evening address to the nation on March 24, Prime Minister Modi had announced a countrywide lockdown to curb the spread of COVID-19. This was preceded by one-day 'voluntary' Janata Curfew on March 22.

The centre announced Unlock 1.0, allowing for a regulated opening of several activities from June 8 onwards, after over two months of lockdown. This has been followed by a series of Unlock guidelines, allowing for reopening of most activities and services in areas which are not Containment Zones.