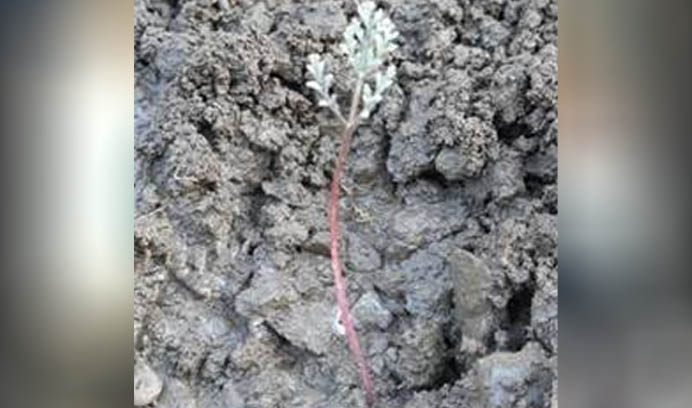 The first sapling of asafoetida planted by CSIR-IHBT at an altitude of 11,000 feet. (source: Twitter@PIB_India)

Indian farmers in the cold Himalayan region will now be able to cultivate asafoetida (heeng) as efforts by the Central for Scientific and Industrial Research-Institute of Himalayan Bioresource Technology (CSIR-IHBT) have borne results.

The first sapling of what is a staple ingredient used to spice up the cuisine in many parts of India was planted at Lahaul and Spiti district of Himachal Pradesh on Sunday. Till now, India has been dependent on imports to meet the country's needs.

The sapling was planted at an altitude of about 11,000 feet above sea level by Director CSIR-IHBT Dr Sanjay Kumar.

India consumes around 50% of the total production in the world. It imports raw heeng from Afghanistan, Iran and Uzbekistan, with Afghanistan being the biggest exporter of heeng to India. This plant is native to the deserts of Iran and mountains of Afghanistan where it is grown in a substantial amount.

It imports around 1,200 tonnes of raw asafoetida worth nearly USD 100 million annually from the three countries. Afghanistan provides for around 90 per cent of the total imports.

The institute said that the domestic plantation of asafoetida will help reduce the imports of the crop from the countries.

According to an official statement, “Due to efforts of CSIR constituent laboratory, Institute of Himalayan Bioresource Technology, Palampur, a historical shift in farming practices is in the offing with farmers of the Lahaul valley in Himachal Pradesh taking up cultivation of asafoetida (heeng) to use vast expanses of waste land in the cold desert conditions of the region. CSIR-IHBT brought in seeds of asafoetida and developed its agro-technology.”

The institute has provided the asafoetida plants to farmers of the Lahaul-Spiti district for the first time in the country to produce asafoetida as a trial.

The government statement said that the institute has introduced six accessions of heeng from Iran through the National Bureau of Plant Genetic Resources (NBPGR), New Delhi, and standardized its production protocols under Indian conditions.

While the seeds have been brought from abroad, the institute has developed a technique to grow the plant from it. The institute said that, it is the first time that India will be undertaking the planting of asafoetida, a spice used widely in Indian cooking.

Heeng is a perennial plant and it produces oleo-gum resin from the roots after five years of plantation. It can be grown in unutilized sloppy land of cold desert regions. The spice is extracted from the stem and tap root of the plant.

Until now, lack of planting material of Ferula assa-foetida plants in India was a major bottleneck in cultivation of this crop.

Recognizing the efforts of the institute, Himachal Pradesh Chief Minister Jai Ram Thakur had announced the introduction and cultivation of Heeng in the state in his budget speech on March 6 this.