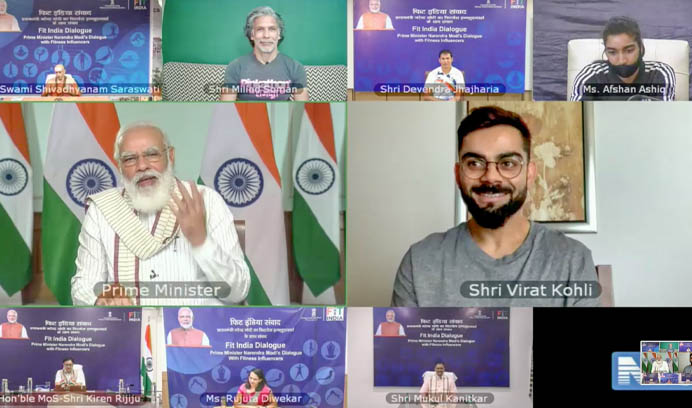 PM Modi interacts with several fitness icons across the country through video conferencing.

Despite restrictions due to COVID-19, the Fit India Movement has been proven successful and has become a people’s movement in just one year of its launch, Prime Minister Narendra Modi said during ‘Fit India Dialogue’ organised to celebrate one year of the movement. PM Modi coined the new fitness mantra, ‘Fitness ki Dose, Aadha Ghanta Roz’ which means to devote half an hour daily to fitness.

Talking to several fitness icons of India through video conference, he said, “Fitness dose, half an hour daily' In this mantra, everyone's health and everyone's happiness is hidden. Be it yoga, or badminton, tennis, or football, karate or kabaddi, whatever you like, do at least 30 minutes daily. We just saw the Ministry of Youth Affairs and Ministry of Health have also issued a fitness protocol together.”

He said that it resulted in improving their emotional bonding, understanding and mutual cooperation. He said the times have changed now. Earlier, elderly used to teach youth about fitness but now the things have taken a reverse. Now, youth are more aware and teaching their parents to take up fitness seriously.

Emphasising on the importance of Mental Health, he said, “Man Changa to Kathauti mein Ganga,” which means ‘If the mind is healthy, everything is fine.’

He said, “This message is not only important spiritually and socially, but it also has deep implications which are very important for our daily life. This also means that our mental health is also very important. That is, a sound mind is in a sound body. The reverse is also true. When our mind is healed and healthy, only the body remains healthy.”

Within 1 year #FitIndiaMovement has taken the shape of people's movement. PM @narendramodi Ji's Fit India Dialogue with some of India's fitness influencers was very informative and interesting! #NewIndiaFitIndia pic.twitter.com/mBrkUWDPUE