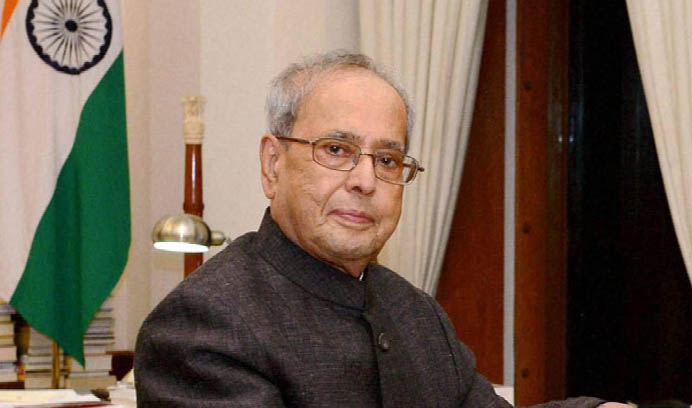 He was conferred with India’s highest civilian honour, Bharat Ratna, in 2019

Former President and Congress stalwart Pranab Mukherjee, who underwent a brain surgery earlier this month, passed away today at the age 84.

He had been admitted to Delhi’s RR Hospital after sustaining injuries due to a fall at home and was operated on to remove a clot in his brain.

He later developed a lung infection due to which he went into a septic shock and his condition deteriorated. His death was confirmed by his son Abhijit Mukherjee on Twitter.

He wrote, “With a Heavy Heart, this is to inform you that my father Shri #PranabMukherjee has just passed away inspite of the best efforts of Doctors of RR Hospital & prayers, duas & prarthanas from people throughout India! I thank all of you.” 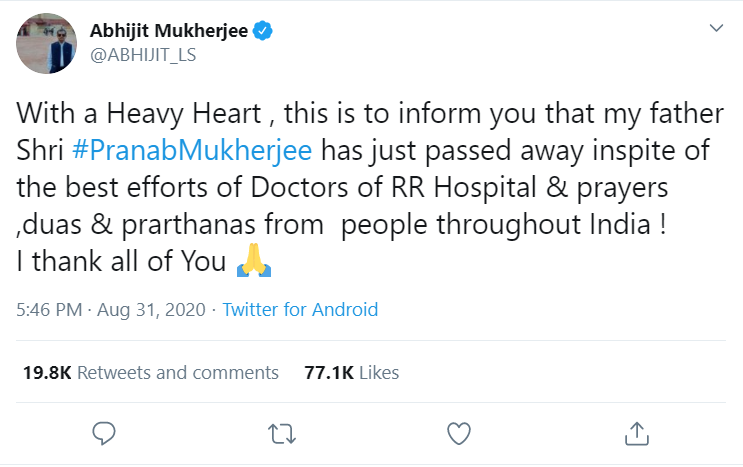 Popularly known as ‘Pranab Da’, Pranab Mukherjee began his professional career as a college teacher and journalist. He joined politics in the late sixties and was elected to the Rajya Sabha on a Congress ticket in 1969.

A long political and illustrious political career followed, culminating in his appointment to the office of the President in 2012, a position he held till 2017. He was conferred with India’s highest civilian honour, the Bharat Ratna, in 2019.

A Congress stalwart, he became a Member of Parliament seven times. Before becoming the 13th President, he served as the Union Finance Minister between 2009 and 2012.

He became Minister of Defence in 2004 and held the position till 2006 as India worked in expanding India’s relationship with the United States.

The news of his death came as a shock for many who paid their condolences on Twitter. President Ram Nath Kovind wrote, “Sad to hear that former President Shri Pranab Mukherjee is no more. His demise is the passing of an era. A colossus in public life, he served Mother India with the spirit of a sage. The nation mourns losing one of its worthiest sons. Condolences to his family, friends & all citizens.” 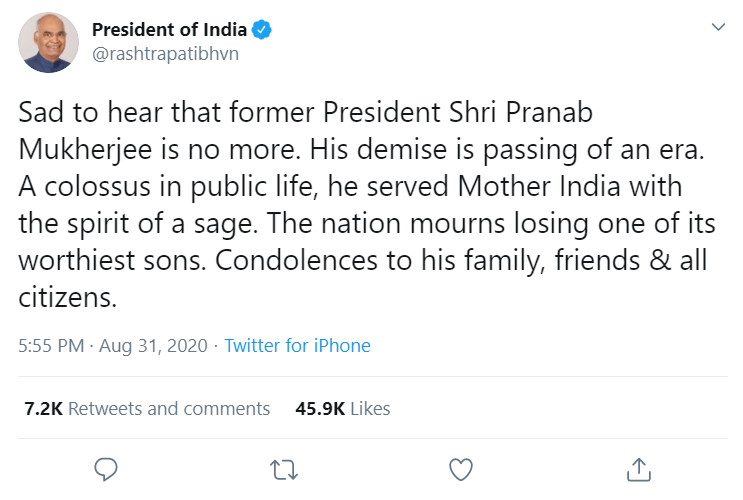 He also wrote, “Endowed with perspicacity and wisdom, Bharat Ratna Shri Mukherjee combined tradition and modernity. In his 5 decade long illustrious public life, he remained rooted to the ground irrespective of the exalted offices he held. He endeared himself to people across the political spectrum.” 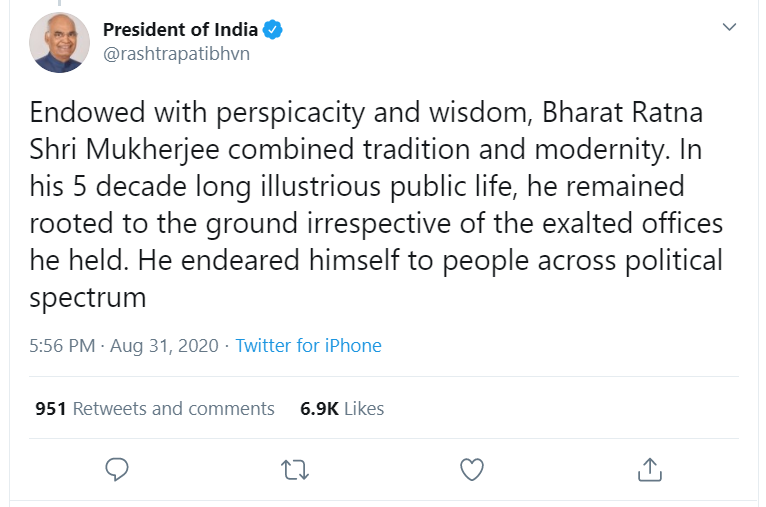 He wrote, “India grieves the passing away of Bharat Ratna Shri Pranab Mukherjee. He has left an indelible mark on the development trajectory of our nation. A scholar par excellence, a towering statesman, he was admired across the political spectrum and by all sections of society.” 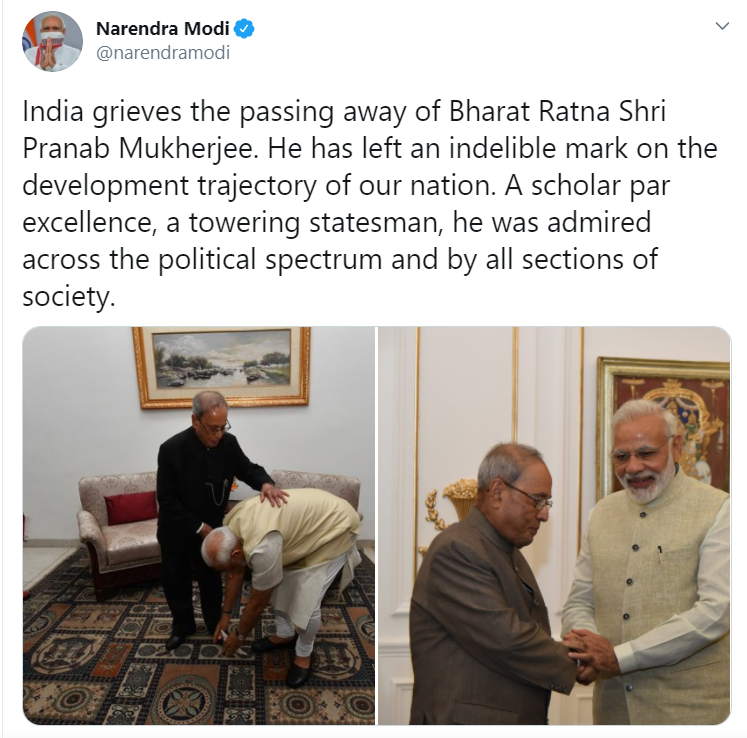 “During his political career that spanned decades, Shri Pranab Mukherjee made long-lasting contributions in key economic and strategic ministries. He was an outstanding Parliamentarian, always well-prepared, extremely articulate as well as witty,” he wrote further. 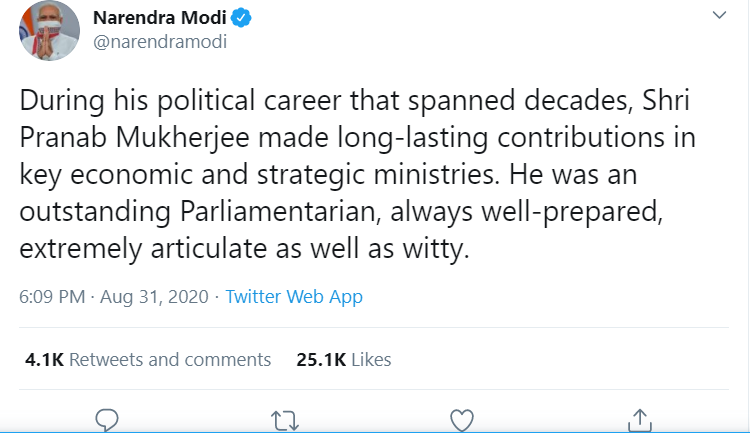 He also wrote, “As India’s President, Shri Pranab Mukherjee made Rashtrapati Bhavan even more accessible to common citizens. He made the President’s house a centre of learning, innovation, culture, science and literature. His wise counsel on key policy matters will never be forgotten by me.” 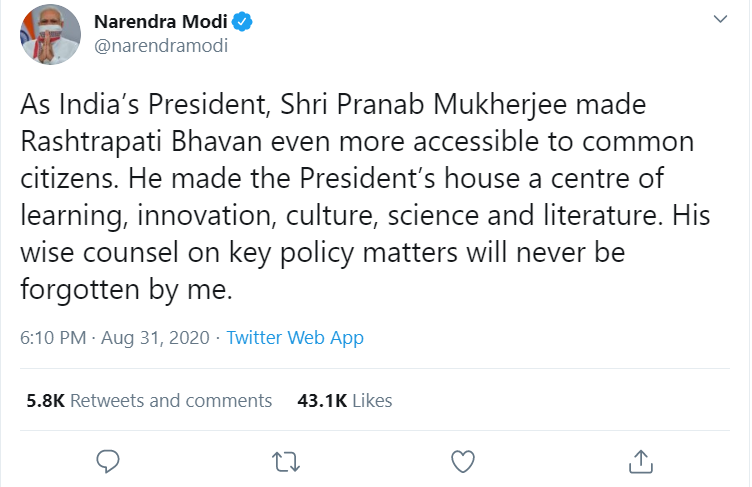 PM Modi condoled his family, friends, admirers and supporters on his unfortunate demise. He wrote, “I was new to Delhi in 2014. From Day 1, I was blessed to have the guidance, support and blessings of Shri Pranab Mukherjee. I will always cherish my interactions with him. Condolences to his family, friends, admirers and supporters across India. Om Shanti.” 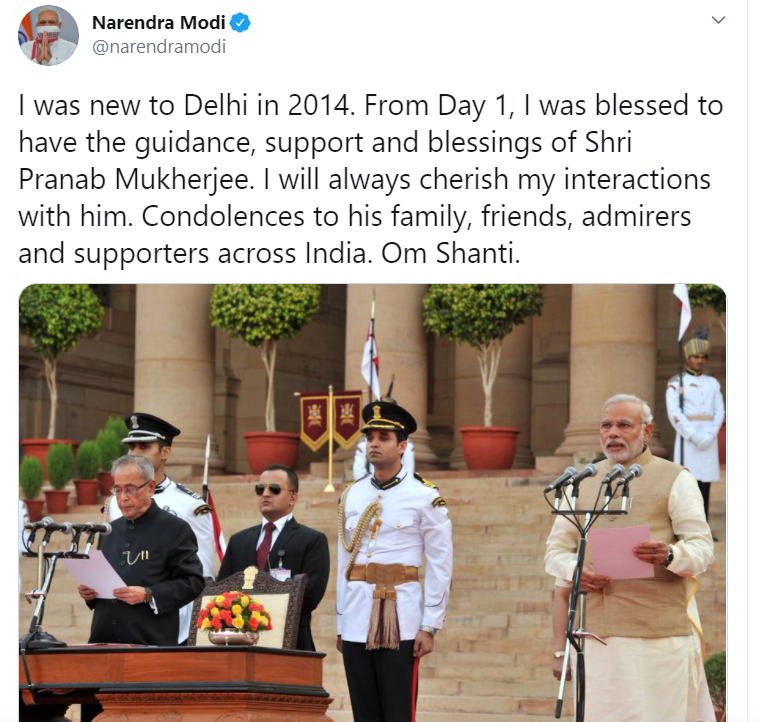 Union Home Minister Amit Shah also expressed his grief on Former President Pranab Mukherjee’s death. On twitter, he wrote, “Deeply anguished over the passing away of former President of India, Bharat Ratna Shri Pranab Mukherjee ji. He was a vastly experienced leader who served the nation with utmost devotion. Pranab da’s distinguished career is a matter of great pride for the entire country.” 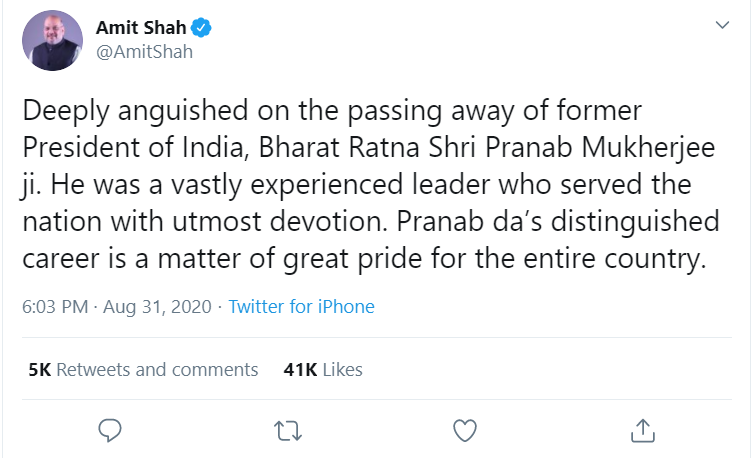