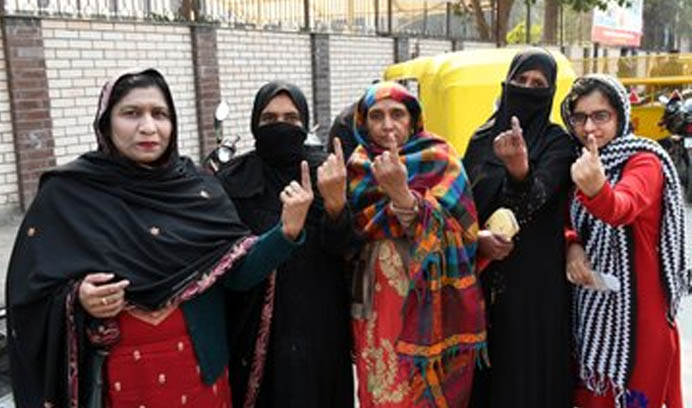 File photo of women after casting their votes in the Delhi Assembly elections held in February. (Source: Twitter @SpokespersonEC

The Prime Minister’s Office (PMO) held a meeting to discuss the possibility of preparing a common voters’ list for elections to all local bodies, state assemblies and Lok Sabha on August 13. The meeting was chaired by Principal Secretary to PM PK Mishra.

The Indian Express reported that two options were discussed in the meeting-first, to amend Articles 243K and 243ZA constitutionally that would make it mandatory to have a single electoral roll for all elections in the country. The second option was to persuade the state governments to amend their laws and adopt the Election Commission’s (EC) voters list for municipal and panchayat polls.

Articles 243K and 243ZA deal with elections to panchayats and municipalities in the states. They empower the superintendence, direction, and control of preparation of electoral rolls and the conduct of these elections to the State Election Commission (SEC).

At present, a majority of the states use the EC’s voters list, instead of their own, to elect their municipalities and panchayats excluding Uttar Pradesh, Uttarakhand, Odisha, Assam, Madhya Pradesh, Kerala, Odisha, Assam, Arunachal Pradesh, Nagaland and the Union Territory of Jammu and Kashmir who have their own electoral rolls for local body polls.

The idea of a common electoral roll is among the promises made by the ruling Bharatiya Janata Party (BJP).

The Indian Express report quoted a former Chief Election Commissioner as saying that a common electoral roll would save the exchequer money and the election conducting agencies the effort. He further noted that it would require a massive consensus-building exercise.