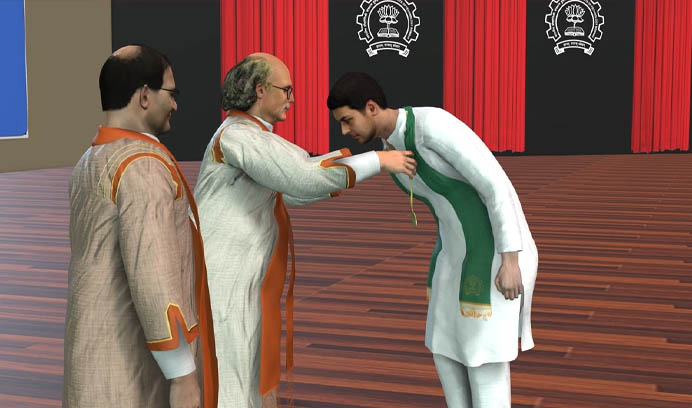 PIB Maharashtra posted a video which showed a student being awarded ‘President of India’s Medal for 2020.”

Virtual reality is the new reality. We often come across these types of slogans but COVID-19 has shown us that it is true and it is us, the human beings that need to change our methods with time and many are changing. The 58th Convocation of the Indian Institute of Technology Bombay is an example for that.

The 58th Convocation of the IIT Bombay was held on Sunday and the institute went virtual. Virtual Convocation is not a new thing in itself but it was for the first time in the 62-year history of IIT Bombay that ‘Virtual Avatars’ of the students were used to give away the degrees and medals to the students.

The Press Information Bureau’s Maharashtra office shared the glimpses of the event later. It tweeted, “Glimpses from @iitbombay’s #VirtualReality Convocation.

Tweeting about the same, PIB Maharashtra wrote, “Today is a special day for many @iitbombay students & their families, also for the entire #IITBombay community. A one-of-its-kind #VirtualReality digital convocation is being held today, in the unprecedented situation due to #COVID19.”

PIB Maharashtra also posted a video which showed a student being awarded ‘President of India’s Medal for 2020.”

Professor Haldane who addressed the students during the two-hour long live session said, “There is a lesson for everyone involved in research”. Wishing them luck, he added, “And if the opportunity arises, I hope one of you will end up with one of these (@NobelPrize)”.

Addressing the convocation, Blackstone Group Chairman and CEO Stephen Schwarzman said, “Innovation to be big driver of India’s growth; With ambitious & tech-savvy population, a forward-thinking govt. that supports entrepreneurship & 4th largest #startup ecosystem, India to stake its claim as one of the world’s greatest innovation hubs.”

This is not the first time that IIT-Bombay has surprised people. In fact, in June, it became the first major institute to scrap all face-to-face lectures for the rest of the year.