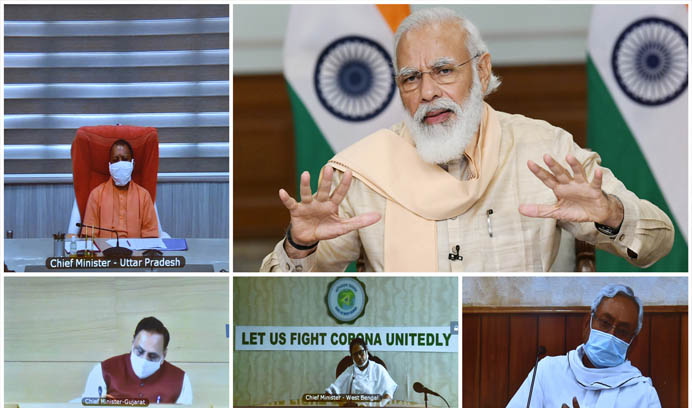 Prime Minister Narendra Modi interacted with Chief Ministers and representatives of 10 states today where he emphasized the need to increase coronavirus testing in the states where the testing rate is low and the number of cases is high.

"In states where the testing rate is low and the positivity rate is high, there is a need to increase testing there in particular, Bihar, Gujarat, Uttar Pradesh, West Bengal, and Telangana. A view has emerged that testing should be increased in these states,” he said.

The meeting was held via video conferencing between the Prime Minister and the chief ministers and representatives of Andhra Pradesh, Karnataka, Tamil Nadu, West Bengal, Maharashtra, Punjab, Bihar, Gujarat, Telangana, and Uttar Pradesh to discuss the current Covid-19 situation and plan ahead, said an official statement issued after the discussion.

The Prime Minister pointed out that if the virus is defeated in these 10 states, then the entire country can win in the fight against Covid-19.

Modi recounted the strategies, which included segregation of containment zones and focus on screening in the high-risk areas, implemented by Union Home Minister Amit Shah in Delhi and the nearby states to control the virus.

"We have seen that in some districts of Uttar Pradesh, Haryana and Delhi, there was a phase when COVID-19 became a huge problem. We held a review meeting and a committee was formed under the chairmanship of Union Home Minister Amit Shah and to a great extent, we achieved desired results,” he said.

He noted that the number of daily tests has reached almost 7 lakh per day. He further noted the usefulness of the Aarogya Setu app, the need to maintain social distancing, and wearing masks in the fight against coronavirus.

PM Modi pointed out that the average Case Fatality Rate (CFR) in India is much less than the rest of the world.

“The average fatality rate is much lower than in the rest of the world. It is a matter of satisfaction. It is constantly decreasing. Percentage of active cases has decreased and the recovery rate has increased. So, this means that our efforts are proving effective,” he added.

According to data by the Ministry of Health and Family Welfare earlier in the day, the number of tests conducted during the previous day in the country was 6,98,290. The country now has 6,39,929 active cases of coronavirus; the number of patients who have recovered has crossed the 1.5-million mark and now stands at 15,83,489.