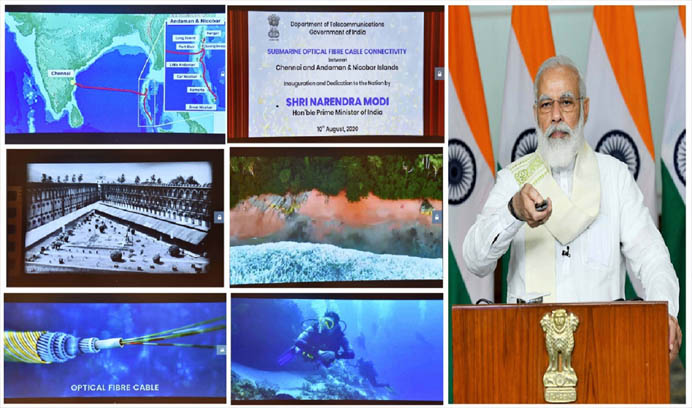 This will provide faster broadband connectivity and more reliable mobile and landline services.

The foundation stone for this project was laid by the PM on December 30, 2018 at Port Blair.

The purpose of the submarine cable is to help A&N in getting cheaper and better connectivity and all the benefits of the Digital India program, especially in improving online education, telemedicine, banking system, online trading, and boosting tourism, an official statement from the Prime Minister’s Office (PMO) said.

It quoted the Prime Minister saying that the government’s focus is on promoting ease of business in the sea and simplifying Maritime Logistics, referring to the speedy construction of the deep draft inner harbor, and the proposal to construct TransShipment Port in Great Nicobar.

Prime Minister Modi signaled the speedy delivery of four ships being built at Kochi Shipyard to improve the water connectivity between the islands and the mainland. He further said that Passenger Terminal in Swaraj Dweep, Shaheed Dweep and Long Island along with Water Aerodrom Infrastructure like Floating Jetty will be ready in the coming months.

PM Modi said that Andaman & Nicobar is an important center for India’s Economic-Strategic Cooperation. He added that under the Act-East policy, the role of Andaman and Nicobar in India's strong relations with East Asian countries and other countries connected to the sea is very high and is going to increase.

He said that high impact projects are expanded to 12 islands of A&N. The Port Blair airport is being enhanced to handle a capacity of 1200 passengers. Besides, airports are ready for operations in Diglipur, Car Nicobar, and Campbell – Bay, he said in the statement.