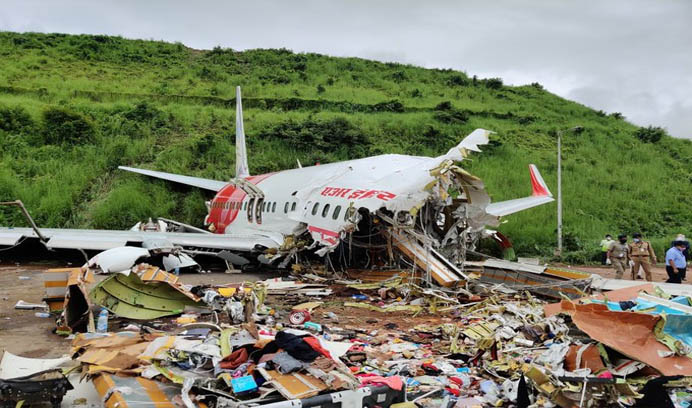 With the Flight Data Recorder and Cockpit Voice Recorder being recovered, aviation authorities have begun investigating the crash of the Air India Express flight in Kozhikode, Kerala, on Friday evening.

Eighteen people, including both the pilots, died in the crash which took place when the flight from Dubai with 191 passengers on board skid off the run-way while trying to land.

The crash investigators will go through the Digital Flight Data Recorder, known as the black box, and Cockpit Voice Recorder which contain crucial information about the flight and conversations between the pilots to piece together what happened.

Initial reports have suggested that due to bad weather conditions and lack of proper visibility, the flight slipped off runway 10 at speed while landing and crashed into a 35-feet valley.

The flight was being operated as a part of the Vande Bharat Mission to repatriate Indians stranded abroad due to the Covid-19 pandemic.

The flight had 174 passengers, 10 infants, 5 cabin crew and two pilots. According to official updates, 127 passengers were taken to the Kozhikode Medical College and other nearby hospitals in Kozhikode and Malappuram districts for treatment. The Civil Aviation Ministry said that a few passengers were in a critical condition, with three of them on ventilators.

According to a report carried by Al Jazeera, a survivor of the accident said, he managed to drag himself out of the emergency door after the crash. The frontal part of the plane was shattered into pieces and that he is grateful to have survived the tragedy. A CISF jawan, who was on duty at the moment said that before anything could be understood, all they saw was the plane plunging into the valley.

Government announces relief families of those who died

Issues with the runway a matter of concern

The Calicut (Kozhikode) Airport being a tabletop airport has been a matter of concern earlier and made its way to the news headlines. In 2013, cracks had developed on the runway, which were spotted by an Air India pilot while taking off. The accident is being compared to the 2010 Mangalore flight crash in which yet another Air India Flight plunged into a valley while landing, resulting in the death of 159 people.