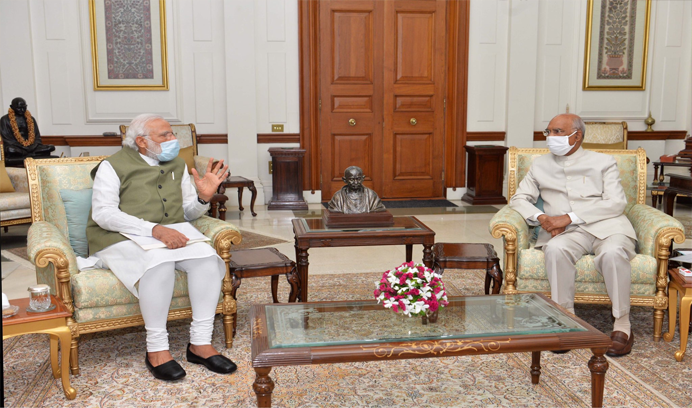 Prime Minister Narendra Modi had addressed soldiers in Nimu, Leh, and interacted with injured soldiers during his Ladakh visit on Friday

Prime Minister Narendra Modi met President Ram Nath Kovind on Sunday, two days after making an unannounced visit to Ladakh to address troops in Nimu, Leh, and briefed him on “issues of national and international importance”.

During the trip, PM Modi had also interacted with soldiers who were injured in the violent face-off with Chinese troops along the Line of Actual Control (LAC).

“Prime Minister @narendramodi called on President Kovind and briefed him on the issues of national and international importance at Rashtrapati Bhavan today,” said a brief statement on Rashtrapati Bhavan’s official Twitter handle.

The Prime Minister had made an unannounced visit to Ladakh amid the stand off with China along the LAC to boost the morale of the Indian troops stationed on the frontlines. He was accompanied by Chief of Defence Staff General Bipin Rawat and Chief of Army Staff General MM Naravane.

Interacting with the soldiers, PM Modi had delivered a stern message to China, saying that the “era of expansionism is over”. He also reiterated that India had always given a befitting response to anyone who had tried to disturb peace and progress.

Indian and Chinese soldiers have been engaged in a stand off since early May. The situation took a turn for the worse on the night of June 15, when soldiers of the two countries engaged in a violent face off, resulting in casualties on both sides.

India has said that 20 soldiers were killed in the line of duty; China is yet to release any figures.

With the situation along the LAC continuing to be tense, senior commanders of the Indian and Chinese armies have held three rounds of talks on June 6, June 22 and June 30. India has said that diplomatic engagement is also continuing for “expeditious, phased de-escalation in keeping with agreement reached by External Affairs Minister S Jaishankar and his Chinese counterpart Wang Yi on June 17.”