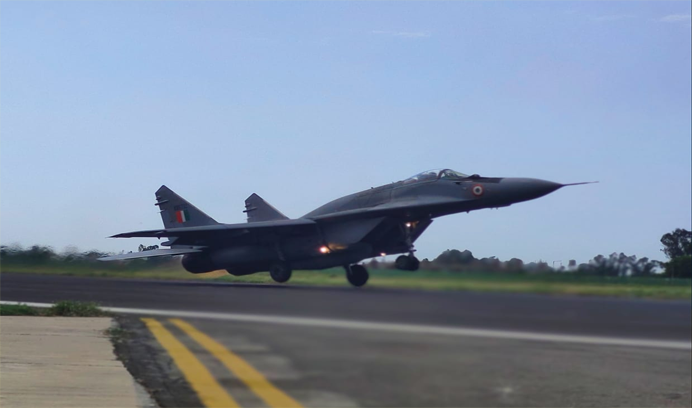 The Defence Ministry on Thursday cleared the purchase of 33 fighter jets from Russia by the Indian Air Force (IAF) in a decision that assumes significance in view of the continuing standoff with China. These include 21 MIG-29 and 12 Sukhoi Su-30 MKI aircraft.

The purchases were approved by the Defence Acquisition Council (DAC) meeting chaired by Defence Minister Rajnath Singh. The council also gave its nod for the upgradation of 59 existing MIG-29 aircraft, an official statement issued by the ministry said.

The decision came on a day that Prime Minister Narendra Modi called Russian President Vladimir Putin and the two leaders expressed their commitment to further strengthen the Special and Privileged Strategic Partnership between the two countries.

Defence Minister Singh had visited Moscow last week to attend the Victory Day Parade and met senior Russian government functionaries.Speaking to the media after the visit, he had said that Russia had assured to expedite the supply of weapons and armed systems needed by the Indian forces.

According to the ministry, while the MIG 29 procurement and upgradation from Russia is estimated to cost Rs 7,418 crore, the Su-30 MKI will be procured from Hindustan Aeronautics Limited (HAL) at an estimated cost of Rs 10,730 crore.

The purchases approved by the DAC include acquisitions from the Indian industry of Rs 31,130 crore. These include Pinaka ammunitions, BMP armament upgrades and software defined radios for the Indian Army, Long Range Land Attack Cruise Missile Systems and Astra Missiles for the Indian Navy and Indian Air Force (IAF).

The Defence Ministry said the acquisition of the Pinaka missile systems will enable raising additional regiments over and above the ones already inducted. The Long Range Land Attack Missile Systems having a firing range of 1,000 kilometres will bolster the attack capabilities of the Navy and the Air Force.

Similarly, the induction of Astra Missiles having Beyond Visual Range capability will serve as a force multiplier and immensely add to the strike capability of the Navy and Air Force, the ministry’s statement said.