India is capable of giving appropriate response to any adversary: PM Modi says 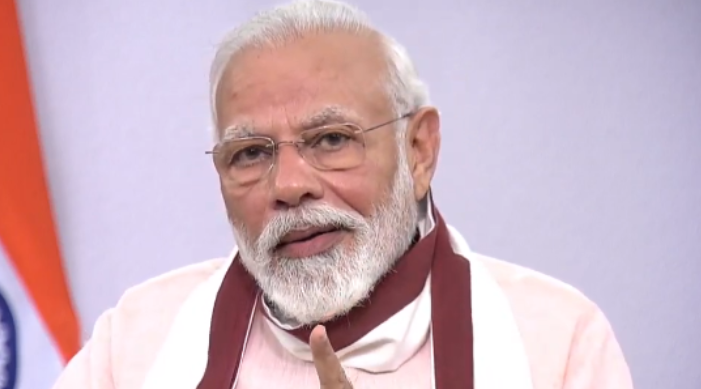 The Prime Minister says the supreme sacrifice of Indian soldiers killed in the Galwan Valley on June 15, constitutes true power and might of the country

Praising bravery of 20 Indian soldiers who died while fighting unarmed with Chinese troops who were double in strength of their Indian counterparts in the Galwan Valley in the night of June 15, Prime Minister Narendra Modi in his address to the nation, through monthly ‘Man Ki Baat’ programme on Sunday said, “Those who cast an evil eye on Indian soil in Ladakh have got a befitting response.”

Obliquely referring to China and its design to forcibly occupy Indian land, the Prime Minister said, “India honours the spirit of friendship. She is also capable of giving an appropriate response to any adversary, without shying away. Our brave soldiers have proven that they will not let anyone cast an evil eye on the glory and honour of Mother India”

Paying a rich tribute to martyred Indian soldiers, he said, “The entire country bows to them in reverence, with gratitude. Just like their family members, every Indian painfully regrets the loss. The inner sense of pride that families feel on the supreme sacrifice of their brave sons, their sentiment for the country, constitutes the true power and the might of the country.”

In this regard, Prime Minister Modi, referred to the statement of the father of martyred Kundan Kumar, a resident of Saharsa in Bihar. He said, “You might have heard parents of martyrs referring to sending other sons, other young family members too, to join the army. The words of the father of Shaheed Kundan Kumar of Bihar, keep echoing. He had mentioned sending his grandsons to the army to defend the country. This spirit permeates across all martyr families. Truly, the sense of sacrifice displayed by these family members is worthy of veneration.”

Further, sparking the spirit of patriotism, he said, “Resolve with which our jawans made the supreme sacrifice for the security of Mother India, should be the aim of our lives and this applies to each and every one of us. Our pursuits and endeavours should be in the same direction and we should strive towards enhancing the country’s capabilities and capacities in safeguarding our borders.

He said, “A gentleman uses education for knowledge, wealth for helping and strength for protecting. India has always used her might, echoing the same sentiment. India’s solemn resolve is to safeguard her honour and sovereignty. India’s aim is – a self-reliant India. India’s tradition is -trust and friendship. India’s spirit is brotherhood. We shall keep moving ahead abiding by these principles.”

Vigorously pushing for self-reliance, he said, “A self-reliant India would be a tribute to our martyrs in the truest, deepest sense.”

In this context, he talked about an Assam resident who has vowed to buy only local.

“Rajni ji has written to me from Assam. She says, after watching what happened in eastern Ladakh, she has taken a vow and the vow is that she will buy only ‘local’ and for the sake of ‘local’, she will also be vocal.”

Promoting the purchase of locally produced goods, he said, “When you buy ‘local’, become vocal for the local you play a role in strengthening the country. This, too, in its own way, is service to one’s country. Whatever may be your profession; wherever, there is ample scope in the realm of service to the country.”

“Keeping in mind the requirement of the country, whatever you do, comes under this very spirit of service. And this very spirit on your part lends strength to the country, one way or the other. We should also remember that the stronger our country is, the possibilities of peace in the world will proportionately be bolstered,” he said.

However, things have changed now, he said, “In the fields of defence and technology, India is relentlessly endeavouring to advance on those fronts. India is taking strides towards self-reliance.”