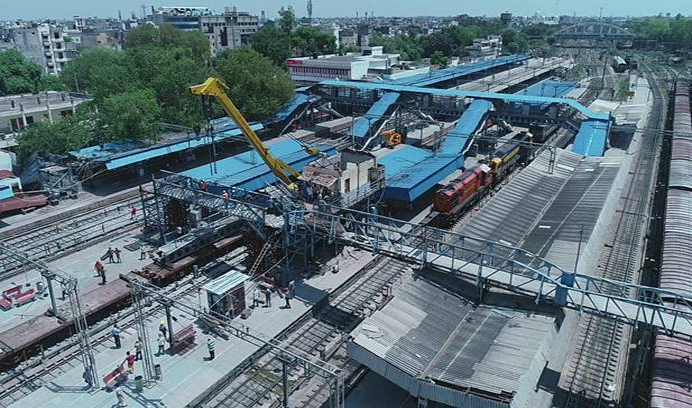 The backend warriors of Indian Railways have fully availed the opportunity provided by suspension of passenger services due to pandemic of COVID 19 to successfully executed more than 200 long pending maintenance works including yard remodeling, repair and re-girdering of old bridges, doubling and electrification of rail lines and renewal of scissor crossovers. Pending for several years, these unfinished projects often confronted Indian Railways as bottlenecks.

During this period Indian Railways focused on several long pending overdue maintenance works which required traffic block of long durations. These works were pending for several years and were confronting Railways with severe bottlenecks. They were planned during lockdown period considering it ‘Once in a lifetime opportunity’ to wipe out these maintenance arrears and take up the execution of work without affecting the train service.

These works taken up for removal of bottlenecks and enhance safety include 82 rebuilding/rehabilitation of bridge, 48 limited height subway/road under bridge in lieu of level crossing gate, 16 construction/strengthening of foot over bridge, 14 dismantling of old foot over bridge, 7 launching of road over bridge, 5 yard remodelling, 1 commissioning of doubling & electrification and 26 other projects.

Some of these key projects are as follows -

Yard Modification work in Jolarpetti (Chennai Division, Southern Railway) was completed on 21st May 2020. It resulted in easing out of curve and enhancing the speed up to 60Kmph on Bengaluru end and facilitated Simultaneous reception and dispatch.

Likewise dismantling of old abandoned unsafe Foot Over Bridge at Ludhinana (Firozepur Division, Northern Railway) was completed on 5th May 2020. Dismantling of this 135 meter long old abandoned FOB structure over 19 tracks and 7 passenger platforms was overdue since 2014 after new FOB was commissioned.

Work of re-girdering of bridge on Tunga River (Mysuru Division, South Western Railway) was completed on 3rd May 2020. Dismantling of unsafe deck of Kopar Road ROB near Dombivali (Mumbai Division, Central Railway) was completed on 30rd April 2020 and it resulting in enhanced safety. This deck was declared unsafe for road users in 2019 and covered 6 railway tracks below.

Two projects of Doubling with Electrification in Varanasi Division, North Eastern Railway were completed on 13th June. One of these projects is Kachhwa Road to Madhosingh Section and the second is 16 km of Manduadih to Prayagraj Section. This resulted in decongestion of east - west routes and facilitation of freight movement. The dismantling work of ROB crossing 8 railway tracks in the approach of Chennai Central Station was completed on 9th May 2020. This ROB was declared unsafe and was closed for heavy vehicles since July 2016. ROB dismantling could not be done as traffic block requirement was very high resulting into massive cancellation /rescheduling of trains with loss of passenger revenue.

Works on construction of two new bridges in Vijayawada Division of South Central Railway were completed on 3rd May. On Howrah- Chennai route, the construction of limited height subway for LC elimination in Khurda Road Division in East Coast Railway was completed on 9th May 2020 resulting in increased operational efficiency of trains and Safety. Signalling upgradation work of Azamgarh station (Varanasi Division, North Eastern Railway) was completed on 23rd May. Mau - Shahganj section has been upgraded to STD.-II (R), yard speed upgraded from 50 kmph to 110 kmph and simultaneous reception, dispatch and shunting facility provided.

Likewise, renewal of wooden layout Scissors crossover with standard Pre-stress Concrete (PSC) layout in Vijayawada & Kazipet yards (Vijayawada Division, South Central Railway) has been completed. A major block of 72 hrs was taken in Kazipet yard for pending yard remodelling. The old wooden scissors crossover laid in 1970 was replaced with standard PSC layout. Insertion of RCC box at Tilak Nagar station (Mumbai Division, Central Railway) was completed in two mega blocks of 28 hrs and 52 hrs durations on 3rd May. This work was taken up to address the problem of flooding in rainy season near Tilak Nagar station on harbour line.

The innovative pilot project for powering Trains by solar power, developed over a vacant railway land at Bina is under extensive testing. This 1.7 Mega Watt project to directly feed to 25 kV Railway Overhead Line is a joint venture of Indian Railways and BHEL.