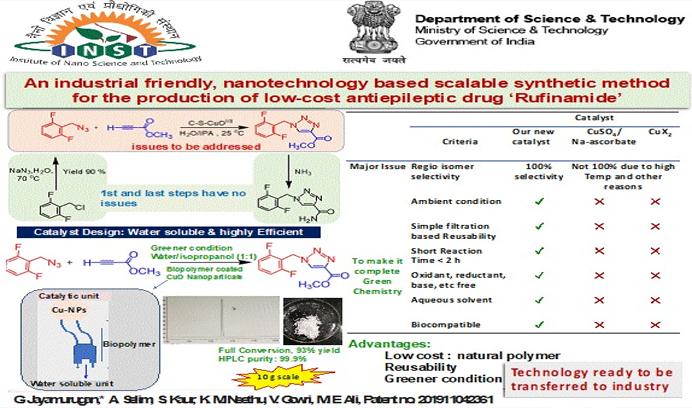 “Several nanotechnology initiatives of DST in seeding the infrastructure, human resources and the Institute of Nanoscience and Technology are now increasingly producing a plethora of useful technologies and products that contribute to an AtamNirbhar Bharat,” says Prof Ashutosh Sharma, Secretary, DST

Scientists at the Institute of Nano Science & Technology (INST), an autonomous institute of the Department of Science and Technology (DST), Govt. of India, have developed a nanotechnology-based industry-friendly and low-cost method for the production of antiepileptic drug ‘Rufinamide’.

Dr.JayamuruganGovindasamy and his co-workers from INST have developed a new recyclable copper-oxide catalyst, which plays a crucial role in the key reaction for producing the Rufinamide drug.

The existing technology for producing the drug has an inherent selectivity issue, which often leads to unwanted non-drug isomer ---1, 5-regioisomer. This necessitates the use of organic solvent, high temperature, and the need to purify and separate the soluble catalyst and so on, leading to unfriendly reaction conditions and high production costs.

In the new production method published in the journal Chemical Communications, unlike the traditional CuSO4 catalyst, the newly designed catalyst comprising of very small-sized (3-5 nm) CuI and CuII is so reactive that the reaction can be conducted efficiently under the aqueous condition and at room temperature. Since the catalyst is coated with slightly modified natural bio-polymer, they are biocompatible and can be separated just by filtration technique.

The new method promises to overcome many of the current challenges in the synthesis of Rufinamide drug such as high cost, the formation of unwanted 1,5-regioisomer in addition to the required 1,4-regioisomer, limited choice of starting materials (propiolic acid derivatives) leading to multistep synthetic sequences, and poor yields due to use of organic solvents and overheating of the reagents.

Dr. G. Jayamurugan, a Ramanujan Fellow of DST, and his co-workers used nanotechnology to develop the new recyclable copper-oxide catalyst supported by customized bio-polymer (available abundantly from biomass). The synthesized catalyst turned out to be highly active in aqueous solvents, making manufacture possible under industrial friendly conditions. The reasons for this high activity are the extremely small sizes (3-5 nm) of copper oxide nanoparticles, the mixed oxidation states of CuI and CuII and their synergistic effects. They also found that the product is fully devoid of 1,5-regioisomer, as indicated by the single peak observed for 1,4-regioisomer in the HPLC with >99% purity. The scalability of the reaction was also demonstrated in 10 g scale reactions in the laboratory condition.

The developed catalyst is not only useful for the Rufinamide drug synthesis, but it is also for other organic transformation reactions. The catalyst can be commercialized for academic use, as well as companies deal with fine chemicals that use these reactions.

Having been well optimized under laboratory conditions in the 10 g scale, the catalytic process can be easily translated into the industrial process. Furthermore, because the choice of metal and the polymers are so cheap, the end product of the present catalytic process can be maintained at low-cost. A patent has been filed for the highly efficient, economical, and eco-friendly process.

Presently only a few companies manufacture the costly Rufinamide drug, which epilepsy patients need to consume continuously for their entire life. Hence, the catalytic process developed by the INST team can be used by Active Pharmaceutical Ingredient,producing companies for mass production to bring down the drug cost.

“Several nanotechnology initiatives of DST in seeding the infrastructure, human resources and the Institute of Nanoscience and Technology are now increasingly producing a plethora of useful technologies and products that contribute to an AtamNirbhar Bharat,” said Prof Ashutosh Sharma, Secretary, DST.