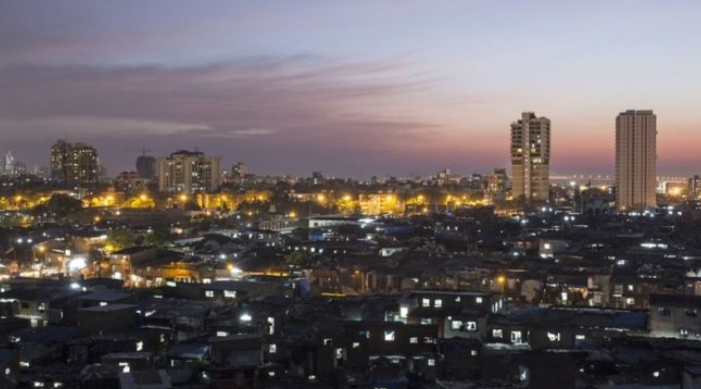 In one of the world's most congested shanty towns, social distancing is not a luxury people can afford. And density is a friend of the coronavirus

Imagine more than 500,000 people spread over 2.5 grubby sq km, less than a square mile. That's a population larger than Manchester living in an area smaller than Hyde Park and Kensington Gardens.

Eight to 10 people live together in poky 100 sq ft dwellings. About 80% of the residents use community toilets. Homes and factories coexist in single buildings lining the slum's narrow lanes. Most people are informal daily-wage workers who don't cook at home and go out to get their food.

The race to stop the virus spread in Asia's biggest slum
And yet Dharavi, a sprawling slum in the heart of Mumbai, India's financial and entertainment capital, appears to have brought an outbreak under control - for now.

Since the first case was reported on 1 April, more than 2,000 infections and 80-odd deaths have been reported here. Half of the cases have recovered.

Daily reported infections dropped from a high of 43 a day in May to 19 in third week of June. The average doubling rate had gone up from 18 days in April to 78 in June.

The scale of the measures put in place - a mix of draconian containment, extensive screening and providing free food to an out-of-work population - has been extraordinary.

Municipal officials say they have traced, tracked, tested and isolated aggressively to halt the spread of infection. At the heart of this has been the screening effort, involving fever camps, doorstep initiatives and mobile vans. The early door-to-door screening by workers in sweltering personal protective gear was not sustainable when the weather turned hot and muggy.

People who are testing positive are being taken away for quarantine
So the effort pivoted to the fever camps, where more than 360,000 people have been screened for symptoms so far.

At each camp, a team of half-a-dozen doctors and health workers in protective clothing screen up to 80 residents every day for temperature and blood oxygen levels using infrared thermometers and pulse oximeters.

People showing flu-like symptoms are tested for the disease on spot. Those who test positive are moved to local institutional quarantine facilities, a bunch of schools, marriage halls, sports complexes. More than 10,000 people have been put into quarantine so far. If their condition deteriorates, patients are moved to public and three private hospitals in the area.

"The fever camps have really helped in checking the spread of the infection," Dr Amruta Bawaskar, a medical officer working in the slum, told me.

With some 11,000 tests done since April, there's a possibility that the slum still has a large population of people who are infected but show no symptoms. But officials believe they have been able to contain the infection at a time when it is picking up speed elsewhere in Mumbai and other hotspot cities.

The relatively low death toll is possibly explained by the overwhelmingly young population of the slum - most infected people have been in the age group of 21 to 50 years.

And to make sure the harsh containment worked, free meals and food rations have been provided to residents trapped at home without work and income.

"I think we have managed to break the chain of transmission without social distancing because there was no scope for that," Kiran Dighavkar, an assistant municipal commissioner in charge of the area, told me.

The slum drew international attention as the inspiration for the Oscar-winning film Slumdog Millionaire. Business school researchers and city planners from around the world have studied its $1bn informal economy and urban dynamics.

"Mumbai has a history of community action. They have a done a good job in helping officials containing the infection in Dharavi," says Dr Armida Fernandez, who's involved with a non-profit working in the slum.

However, the economic costs of the draconian containment have been enormous.

The slum is home to thriving leather, pottery and textile stitching businesses. It has 5,000 small factories which pay taxes and some 15,000 single-room workshops. It is also Mumbai's main hub of plastic recycling.

Not surprisingly Dharavi is a place where migrant low-cost skilled labour has thrived for decades. After the lockdown, an estimated 150,000 of them left the place for their native villages after their workplaces shut and earnings dried up. Residents have pawned their gold, depleted their savings and been pushed into debt.

"It was a very harsh containment. It killed the economy of Dharavi," says Vinod Shetty, a lawyer who runs a non-profit called Acorn India, which works in the slum.

"People are living hand to mouth. They are not getting work inside our outside the slum." In other words, the trade-off between lives and livelihood has been harsh.

The next challenge, agrees Mr Dighavkar, is to slowly open up the factories so that people can go back to work, and ensure that people continue to wear masks and follow all procedures.

How long can the slum remain in a lockdown mode to contain future waves of infection? How long can non-profits continue to help as they start to run out of resources in what promises to be a long and weary battle?

"The war is not yet over. Not until the virus has left for good, anyway," Mr Dighavkar says.