HT Salutes: A zoologist who saved birds from dying of hunger 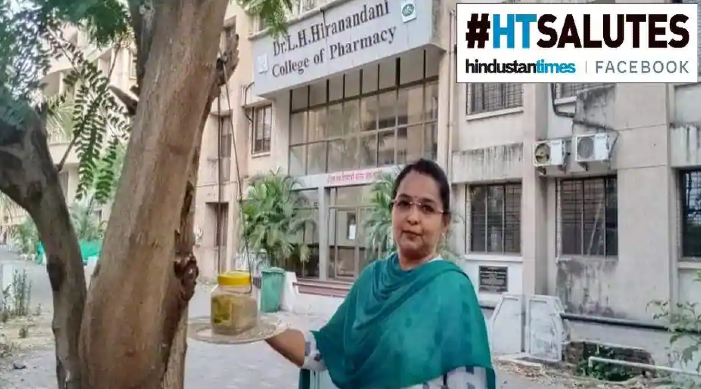 Khanchandani acquired plastic containers and pet bottles from grocers while collecting melamine plates from hotels and restaurants, with this plastic refuse, she made 541 bird feeders over the course of the next 2 months

Three weeks into the lockdown imposed due to the Covid-19 pandemic, the sudden death of around 30 birds, mostly crows, over two days (April 11 and 12) within and around the Smt Chandibai Himathmal Mansukhani (CHM) College campus in Ulhasnagar, Thane district, came as a shock for college staff and residents.

The college principal Manju Pathak explained that prior to the lockdown, birds used to feed on leftovers of the college canteen, and grains left daily by commuters on roads that run along the periphery of the college located opposite Ulhasnagar railway station.

“Following the lockdown, this stopped. On April 11 two birds died, and a day later 24 more including crows and pigeons were found dead across the campus. A veterinarian who had conducted a post mortem on one of the birds told us that they died owing to the lack of food and water,” Pathak said.

On April 11, when Sarita Khanchandani, 43, a zoologist and former school teacher learnt about the incident, she contacted the college principal and asked permission to set up bird feeders inside the college.

In the weeks that followed, only one more bird died, Pathak said.

However, Khanchandani was still perturbed. “I needed to do something more for the species that cannot voice their concerns,” she said.

Khanchandani managed to acquire plastic containers and pet bottles from local grocers while collecting melamine or plastic plates from hotels and restaurants. She also collected wires and cables. With this plastic refuse, Khanchandani made 541 bird feeders over the course of the next two months.

“It’s a simple concept,” she said. “You drill a hole in the centre of the plate. Then plastic containers are attached on top using nut bolts. By making a few more holes on either side of the container or bottle, a bunch of cables or wires are passed through them to ensure they are sturdy when hung from trees or elevated areas. Next, feeders were filled with millet or rice grains.”

With the help of local security staff and teenagers from her colony, she installed these feeders across Ulhasnagar, Ambernath, and a few more areas of Thane district.

“We ensured these feeders were placed in areas generally frequented by birds. We received videos from [residents] and realised not just birds but even squirrels were using them.”

Such efforts mainly help make people aware of the responsibility we have as citizens, said experts. “Historically, the architecture of houses were such that were nooks and crannies around homes where birds could make nests, and people would leave grains but as cities became more cosmopolitan, the architecture changed, reducing space for them,” said Sunil Limaye, additional principal chief conservator of forest (wildlife), Maharashtra. “She (Khanchandani) has done a stupendous job by setting up feeders across numerous locations acting as stopovers for birds, and ensuring they don’t run out of food or water.”

Of the common birds found across cities, more than crows, pigeons had trouble finding food during the lockdown, said Deepak Apte, director, Bombay Natural History Society adding, “Such efforts need to be encouraged as they are hands on engagement with nature, and creating much needed attention to protect our feathered friends.”

“Khanchandani’s efforts are a reminder for all of us for doing a tad bit more away from our daily lives for so many species dependent on us,” Pathak said.

Hindustan Times and Facebook have partnered to bring you the next 15 stories of HT Salutes. HT is solely responsible for the editorial content of this series