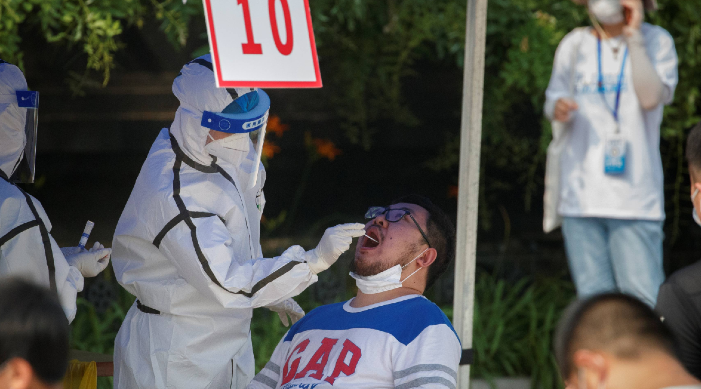 The Nikkei Asian Review is tracking the spread of the new coronavirus that originated in the central Chinese city of Wuhan.

Global cases have reached 8,896,153, according to Johns Hopkins University.

11:30 a.m. Japan's professional baseball and soccer leagues will allow spectators to attend games from July 10, Nippon Professional Baseball Commissioner Atsushi Saito and J-League Chairman Mitsuru Murai say. The NPB opened its 2020 baseball season on Friday without fans in the stands due to the coronavirus pandemic.

10:00 a.m. Beijing reports nine new cases of the coronavirus in the city for June 21, down from 22 a day earlier. The capital reported its first case in the latest wave on June 11. The resurgence has been linked to a wholesale food center in Beijing's southwest. So far, 236 people in the city have been infected in the outbreak.

9:50 a.m. Gold prices rose on Monday to their highest in a month as surging coronavirus infections heightened concerns over a delay in the global economic recovery and prompted investors to seek the safe-haven metal.

1:42 a.m. India's drug regulator greenlights the production of a generic version of Gilead Sciences' remdesivir treatment by Hetero Labs and Cipla, according to the Indian drugmakers.


An ampule of the Ebola drug Remdesivir is pictured during a news conference in Hamburg, Germany on Apr. 8. © Reuters
12:57 a.m. The new coronavirus likely began spreading in China last fall, based on genome analyses by research teams in the U.K. and elsewhere.

12:03 a.m. PepsiCo China says it halted operations at a food processing plant in Beijing after at least one employee tested positive for the virus. Production was stopped with the confirmation of the first case on June 15.

5:13 p.m. Chinese researchers have started a phase two clinical trial of a coronavirus vaccine candidate, the Institute of Medical Biology at the Chinese Academy of Medical Sciences says, in efforts to further assess effectiveness and safety.

5:11 p.m. Australia's second most populous state, Victoria, extends its state of emergency for four more weeks to July 19, as it battles a spike in coronavirus cases with a rise in community transmission. Victoria reports 19 new infections, the fifth day in the double digits.

11:32 a.m. Mainland China reports 26 new cases for Saturday, down from 27 a day earlier, driven largely by the latest outbreak of COVID-19 in Beijing. Of the new infections, 22 were in the Chinese capital, the same as a day earlier.

10:41 a.m. President Donald Trump tells thousands of cheering supporters at a campaign rally in Oklahoma that he asked U.S. officials to reduce testing for the virus, calling it a "double-edged sword" that led to more cases being discovered. Trump said the U.S. has tested 25 million people, far more than other countries. "When you do testing to that extent, you're gonna find more people, you're gonna find more cases. So I said to my people, 'Slow the testing down, please," Trump told supporters, many of whom did not wear masks. A White House official said Trump was joking about his call for a slowdown in testing.

5:38 p.m. Indonesia reports 1,226 new infections, taking its total cases to 45,029, and 56 more deaths, with fatalities now reaching 2,429. The country has the highest coronavirus death toll in East Asia outside of China.

3:00 p.m. Japan launched a coronavirus tracing app developed by Microsoft. Smartphones with the app installed can detect each other via Bluetooth short-range wireless and log those who have come in close contact.

10:30 a.m. The U.S. rejects a request by airlines from China for additional weekly flights between the two countries, but says the decision is not meant to escalate tensions over travel restrictions, Reuters reported.

4:30 a.m. The U.S. Navy has decided not to reinstate Captain Brett Crozier as the commanding officer of the aircraft carrier USS Theodore Roosevelt after an in-depth probe found him and his then-boss Rear Admiral Stuart Baker at fault for their responses to the coronavirus outbreak.

2:07 a.m. Apple says it will close some U.S. stores again as the number of coronavirus cases spikes in the country. A total of 11 outlets will be shuttered in Florida, Arizona, North Carolina and South Carolina.