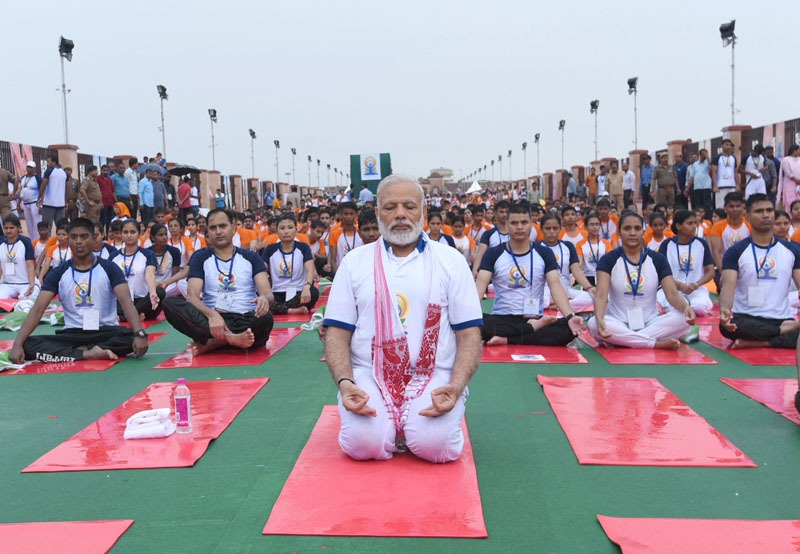 International Day of Yoga, 2020 is just a day away. During the time when the country is combating COVID-19 pandemic, the preparatory activities are understated. They are nevertheless witnessing a surge. Since mass gatherings are not advised in the present circumstances, ‘Yoga at Home, Yoga with Family’ is being encouraged by the Ministry of AYUSH to celebrate the 6th IDY2020 at home with families.

Lakhs of people have already committed to be part of IDY- 2020 and one of the goals of the Ministry of AYUSH has been to achieve harmony in the Yoga performances. This is sought to be achieved by encouraging Yoga performance based on the standardised Common Yoga Protocol from the respective homes of the participants at 07.00 a.m. on the 21st of June, 2020. Additionally, the Ministry of AYUSH in association with Prasar Bharati has made arrangements for telecasting a trainer-led Yoga session on DD National to facilitate the harmonious Yoga practice. The main highlight of this televised event would be the Yoga Day Remarks of the Prime Minister, which would be televised at 6.30 AM.

Numerous celebrities and influencers have shared motivational messages and thoughts encouraging the people to participate in the 6th International Day of Yoga. Some of the celebrities include the well-known movie actors like Akshay Kumar, Anushka Sharma, Milind Soman, and Shilpa Shetty Kundra. In their promotional messages shared with the Ministry of AYUSH, they describe Yoga as a disciplined and patient way of leading our lives. They emphasise that Yoga is a practice which unites people across the world for a common cause and conveys the message of peace and harmony. These and other Yoga Day messages can be seen on the Facebook (https://www.facebook.com/moayush) and other social media handles of the Ministry.

To enable the public to prepare in advance for IDY, the Ministry of AYUSH had made various online resources available on its digital platforms like the Yoga Portal and the social media handles like YouTube, Facebook, Twitter and Instagram. Several televised Common Yoga Protocol sessions have been disseminated which were followed by thousands of viewers from different parts of the country. These electronic and digital resources provided ample opportunities for people to learn Yoga from their homes, ahead of the International Day of Yoga.