No Chinese troops on Indian side of border: PM Narendra Modi at all-party meet 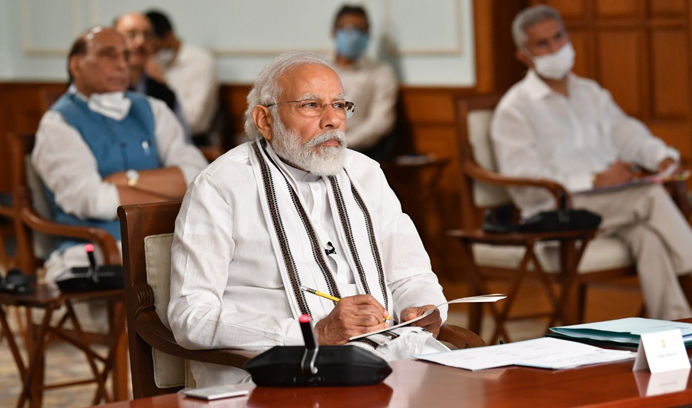 Leaders of political parties expressed strong support for the armed forces and government during the meeting.

There were no Chinese troops on the Indian side of the border, nor had they taken over any Indian post, Prime Minister Narendra Modi said on Friday.

Addressing leaders of political parties at a virtual all-party meet, PM Modi said 20 Indian soldiers had been martyred in Ladakh’s Galwan Valley but they had taught a lesson to the aggressors.

India wanted peace and friendship in the region but protecting the country’s sovereignty was of foremost importance, he stated.

He emphasised that the Indian armed forces possessed the capability to act in different sectors at the same time. While the armed forces were taking all the steps needed, India had made its stand very clear to China through diplomatic channels.

Over the past few years, India has been giving priority to improving the infrastructure to secure its border areas. Due to this, the country’s patrolling capabilities had gone up, particularly along the LAC, PM Modi pointed out.

This had ensured that India’s armed forces could monitor all activities and respond effectively when needed, he said.

Earlier, the leaders of India’s major political parties had said that the country stood united in facing external threats.

They pointed out that India wanted peace but this did not mean that it was weak.

Congress working president Sonia Gandhi said that the entire opposition stood in support of the country’s armed forces. They had the backing of the entire country, she pointed out, even as she sought an assurance that China would revert back to the original position on the Line of Actual Control (LAC).

Nationalist Congress Party (NCP) leader and former Defence Minister Sharad Pawar said that China’s People’s Liberation Army (PLA) must be evacuated from occupying high ground in Galwan Valley on the Indian side. He advised the use of diplomatic channels to dilute tension on the border and make China see reason.
West Bengal Chief Minister and Trinamool Congress leader Mamata Bannerjee was among the leaders who expressed strong support for the government and the armed forces in handling the situation on the India-China border.

The meeting began by paying tributes to the 20 Indian soldiers killed in the violent face-off with Chinese troops in East Ladakh’s Galwan Valley on Monday night.

Defence Minister Rajnath Singh and External Affairs Minister S Jaishankar briefed the parties on the violent face-off and the clash with Chinese troops.

The sacrifice of Indian soldiers will not go in vain, PM Modi had said on Wednesday, a day after the Indian Army confirmed that 20 personnel had been killed in a violent clash with Chinese troops at Galwan Valley in Ladakh.

"India wants peace but when provoked, India is capable of giving a fitting reply, be it any kind of situation," PM Modi said, in a strong warning to China.

“I want to assure the country, the sacrifice of our soldiers will not go in vain. India's integrity and sovereignty is supreme for us and nobody can stop us from protecting it,” Prime Minister Modi said, referring to the violent face-off along the Line of Actual Control (LAC) on Monday night.

India has categorically blamed China for the flare-up, saying that Indian troops always operated on their own side of the LAC and that it was Chinese troops who had sought to change the status quo despite a consensus at the Commander-level talks held on June 6.

India has also dismissed Chinese claims that Galwan Valley belongs to them.

“Making exaggerated and untenable claims is contrary to understandings reached between senior commanders on June 6,” MEA spokesperson Anurag Srivastava had said in response to a media query on Wednesday.