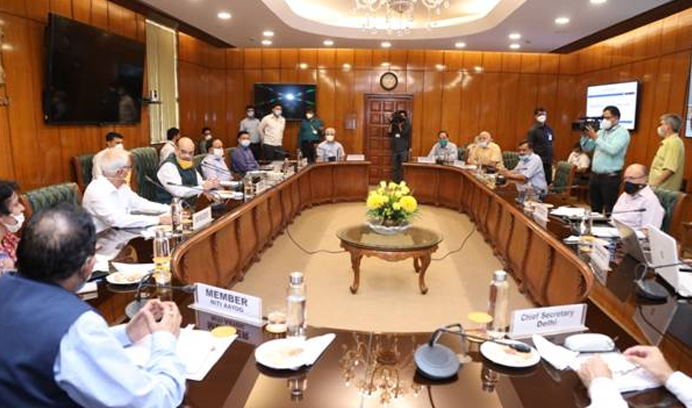 Union Minister Amit Shah said the Centre is committed to check the Covid-19 spread in the national capital.

While asking for house-to-house surveys in Containment Zones in Delhi in order to improve contact mapping, Union Home Minister Amit Shah on Sunday stressed for doubling of Covid-19 testing in next two days and trebling after six days to check the corona virus spread in the national capital.

He also asked for making available testing facilities in each polling station.

In a meeting with Delhi Chief Minister Arvind Kejriwal and other senior officers of the national capital, he also emphasized effective monitoring by asking all residents to download the Aarogya Setu app on their mobile phones. He also said the Centre is committed to check the Covid-19 spread in the national capital.

Notably, for effective transmission of guidelines and information regarding coronavirus to clinics and minor hospitals in Delhi, the Centre has decided to constitute a committee of senior doctors in AIIMS so that the best practices in the fight against corona are communicated to the lowest level. A helpline number on telephonic guidance will be set up and released on Monday.

The Union Minister said a committee has been constituted under the chairmanship of Dr. VK Paul, Member NITI Aayog to ensure the availability of 60 percent of their corona beds by private hospitals at lower rates and fix the rate of corona testing and treatment. The committee will submit its report by Monday.

The Home Minister underlined the country's resolve in tackling the corona pandemic with vigour and strength and shares the pain of the families who have lost their dear ones.

He said the government has decided to issue fresh guidelines regarding the last rites of the deceased, which will reduce the waiting time.

Amit Shah said the nation is fighting this global outbreak with alertness and cooperation of all under the leadership of Prime Minister Narendra Modi. The country is also sincerely indebted to several NGOs for their exemplary devotion during this crisis.

Several other decisions were also taken during the meeting. A joint team of doctors of the health departments of the Centre and Delhi government, AIIMS and all three municipal corporations of Delhi will visit all Corona hospitals in Delhi and submit a report after inspecting the health infrastructure and preparedness for treatment of COVID-19 patients.

The Union Minister also directed to ensure that the various decisions taken today are implemented at the ground level by the health and other departments of Central and Delhi governments and experts.

The Centre also assured the Delhi government that it shall provide all necessary resources including oxygen cylinders, ventilators and pulse oximeters.