‘Won’t keep anyone in dark’: Rajnath Singh’s swipe at Opposition over LAC tension 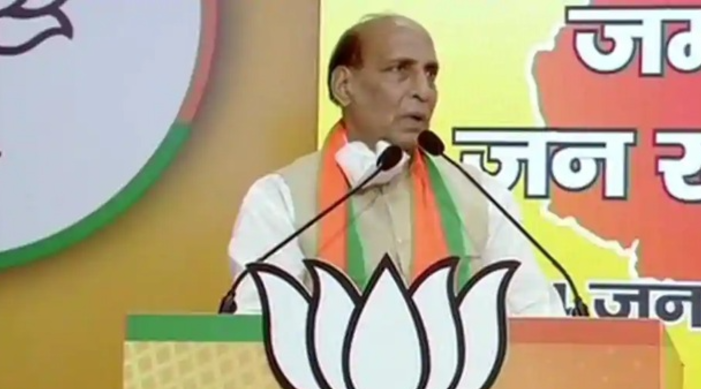 Defence minister Rajnath Singh said that the government won’t compromise with national pride in any situation. He was addressing a virtual rally on Sunday

Defence minister Rajnath Singh said on Sunday that the central government is engaged in talks with the Chinese side at diplomatic and military levels to resolve the border standoff.

He also took a jibe at the Opposition parties, saying the government will not compromise with the national pride.

“Talks are underway with China at diplomatic and military levels. China too has expressed wish to resolve this issue via talks. I’d like to inform Opposition that our government won’t keep anyone in the dark,” Singh said while addressing the ‘Jammu Jan Samvad rally’ via video-conferencing.

“I assure you that we won’t compromise with national pride in any situation,” he added.

His comments came a day after Army chief General MM Naravane said that disengagement of Indian and Chinese forces is taking place in a “phased manner” along the contested Line of Actual Control (LAC).

“I would like to assure everyone that the situation along our border with China is under control,” said General Naravane.

“Both sides are disengaging in a phased manner. We have started from the north, from the area of the Galwan river, where a lot of disengagement has taken place,” he had further said.

The disengagement began after a meeting between Lieutenant General Harinder Singh, commander of Leh-based 14 Corps, and Major General Liu Lin, commander of the People’s Liberation Army in South Xinjiang region, on June 6.

Army delegations from India and China, led by major general-rank officers, on Friday held discussions in eastern Ladakh to resolve the standoff between the border troops. This was the fifth meeting between the two major generals to break the stalemate that began with a violent confrontation between rival patrols near Pangong Tso on the night of May 5.

Last month’s violent confrontation triggered a military build-up on both sides of the LAC that stretched from Ladakh to Uttarakhand, Sikkim and Arunachal Pradesh.

The Opposition parties had attacked the government with Congress leader Rahul Gandhi leading the charge. He had questioned if the Chinese troops have entered Indian territory. Rajnath Singh had replied to his commentd, with a stinging attack on the Congress party.

Later, the Trinamool Congress also attacked the government on the LAC standoff. Abhishek Banerjee, the nephew of chief minister Mamata Banerjee and TMC’s youth wing chief, asked Union minister Amit Shah if the Chinese have occupied the Indian territory. The tweet was ahead of Shah’s virtual address to the people of West Bengal where he stung the state government on issues related to political violence, corruption, politics of appeasement, politicisation of people’s welfare and other administrative failures.