Amid Escalating Tension With China, Australia and India Strengthen Partnership 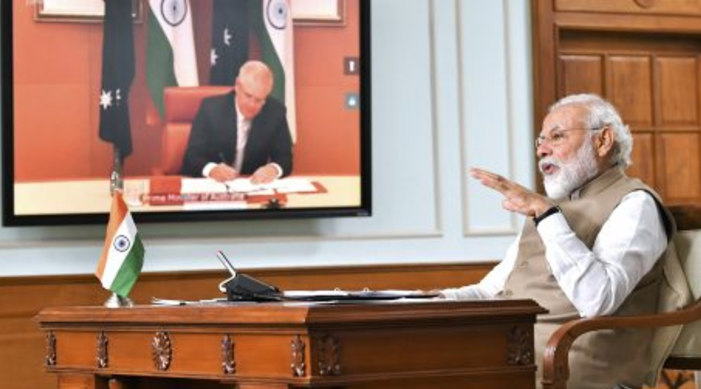 The China-Australian relationship is at an all-time low. Over the past six months, disputes typically kept behind closed doors have leaked into public view. It began with Australia pushing for an independent investigation into the origins of the coronavirus. China responded with threats of economic coercion, and then placed tariffs on Australian barley and banned beef from four major Australian exporters.

Then came warnings from Beijing that Chinese travellers and students should avoid Australia, stating it is unsafe due to racist attacks against Asians during the pandemic. “That’s rubbish. It’s a ridiculous assertion and it’s rejected,” Australian Prime Minister Scott Morrison told 3AW. A recent survey has, however, identified an increase in racist incidents, including abuse, physical intimidation, and spitting across the country.

As Australian and Chinese officials continued to battle it out verbally, high up in the Himalayan mountain range, tension between the armies of the world’s two most populous nations, India and China, had also reached a simmering point.

Clashes along the disputed border aren’t unusual but a few days after one particularly fierce fight, in which troops from both sides were injured and had to be evacuated, reports emerged of Chinese troops confronting Indian soldiers across several other checkpoints and of Chinese troops amassing inside Indian territory.

India responded by sending thousands of military personnel to reinforce the area. “Our build up matches the Chinese deployment, if not more, in terms of troops, support elements, force multipliers and aerial support,” said an Indian official. A senior officer stationed in the region told News18 that: “China stabbed us in the back. In the middle of a pandemic, this was not expected.”

Beijing and New Delhi have since agreed to “peacefully resolve” the situation while the Australian government has made it clear that it will not be escalating its confrontation with China by entering into a trade war with its largest two-way trading partner.

But Chinese aggression is not limited to border incursions in the Himalayas or diplomatic spats with Australia. In recent weeks, the Chinese Coast Guard rammed and sank a Vietnamese fishing vessel, swarmed and harassed a Malaysian oil rig, and threatened a Philippine Navy ship, all while the Chinese air force continued to exercise close to Taiwan and the government moved to pass laws that restrict Hong Kong’s autonomy and freedoms.

With China’s ditching of soft power, the idea of regional cooperation among its neighbors has begun to pick up momentum. Just last week, Australia and India raised their relationship to a “Comprehensive Strategic Partnership” and issued a joint declaration on a “Shared Vision for Maritime Cooperation in the Indo-Pacific.”

Ahead of the virtual summit between India’s Narendra Modi and Australia’s Scott Morrison, adjunct professor of Asian Studies at the University of Adelaide Purnendra Jain wrote: “While it is unlikely that the ‘C’ word will figure in the talks between Morrison and Modi, China will no doubt loom large in both leaders’ minds.”

“Both countries are members of the so-called ‘Quad,’ a security dialogue framework comprising Japan, India, Australia and the United States,” he wrote. “After being hesitant initially, both have now committed to it. India has signalled a desire to become more involved as Modi has pushed back against China’s influence in the region.”

While much of the new partnership is focused on economic cooperation, with Australia trying to shift its economic dependence away from China and India wanting greater access to Australian goods and services, the maritime cooperation is a key component to both nations’ efforts to respond to China’s intensified interest in the Indian and Pacific Oceans.

The joint declaration states that: “Both countries share a view that many of the future challenges are likely to occur in, and emanate from, the maritime domain.” The agreement will allow Indian and Australian military ships and aircraft to refuel and access maintenance facilities at each other’s bases.

Some regional security experts have flagged the possibility of the maritime agreement growing to include the mutual use of India’s Andaman and Nicobar Islands and Australia’s Cocos Islands for military purposes. This would give both countries the ability to expand their surveillance and security presence beyond their current reach. Such an agreement would give India better access to the Pacific Ocean and Australia better access to the Indian Ocean.

In 2007, under the Quad alliance, Australia participated in exercises with the Indian, American, and Japanese navies but withdrew after China expressed concerns. The U.S., Japan, and India continued the exercises. Australia has reportedly been lobbying to re-join the exercises since as early as 2015. Since then, and much to Australia’s dismay, India has not invited Australia back in, but it seems much more likely with this new maritime agreement now in place.