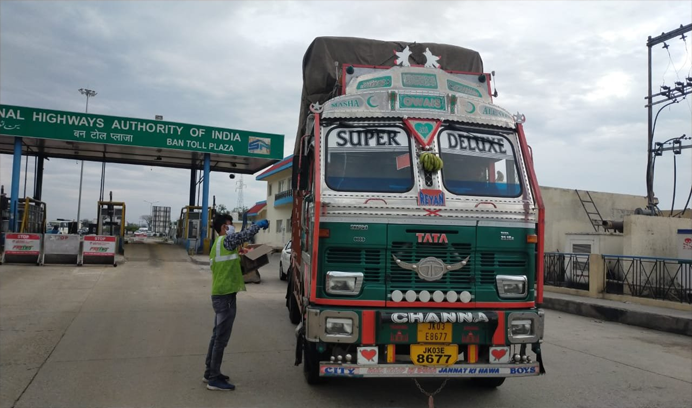 File photo of a truck at a toll plaza on a highway. (Source: Twitter @NHAI_Official)

These restrictions did not apply to buses carrying passengers or trucks carrying goods on highways, the Union Home Ministry has said

States and Union Territories have been directed to permit the movement of people and vehicles on highways during the curfew restriction from 9 pm to 5 am. The curfew timings had been eased as part of the Unlock 1 guidelines announced by the Union Home Ministry on May 30.

After reports that some state and UT administrations were restricting movement on highways during this curfew, Union Home Secretary Ajay Bhalla wrote to them on Friday, pointing out that these restrictions did not apply to buses carrying passengers or trucks carrying goods on highways.

The curfew restrictions also do not apply to people travelling to their destinations after disembarking from buses, trains, and flights, the letter said. Loading and unloading of goods as part of supply chains and logistics are also exempt from the curfew restrictions.

Asking state and UT administrations not to restrict such movement, the Union Home Secretary directed them to advise district and local authorities about these aspects.

The purpose of restricting the movement of individuals, except for essential activities, between 9pm and 7 am was primarily intended to prevent congregation of persons and to ensure social distancing, the Union Home Secretary’s letter said.

While issuing detailed instructions for Unlock 1, the Union Home Ministry had eased the curfew timings from the earlier 7pm to 7am to 9pm to 5 am.

Under Unlock 1, the Centre had released a roadmap for phased relaxation of the restrictions that had been in place since Prime Minister Narendra Modi announced a complete countrywide lockdown from March 25.

Phase I of these guidelines allowed places of worship, malls, and restaurants to reopen from June 8 onwards. A decision on opening schools, colleges, and other educational institutions will be taken in July, as part of the second phase of Unlock 1. The government will subsequently look at easing other restrictions like international air travel and metro rail services.