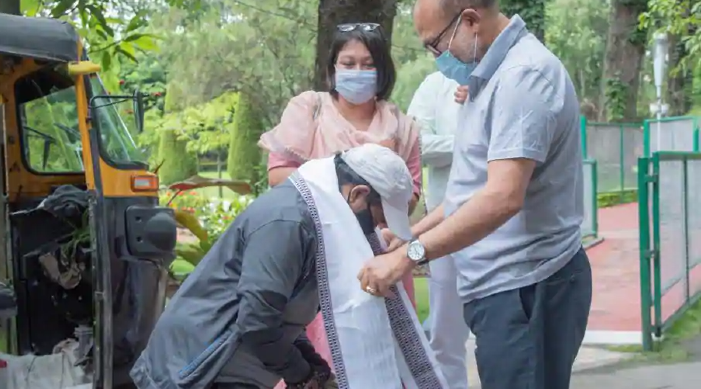 A woman auto driver, who volunteered to drop a recovered Covid-19 patient from Imphal to a hill town in Manipur undertaking an eight hours long journey covering over 140 kms, was given a cash reward of Rs 1,10,000 on Thursday.

Manipur chief minister N Biren Singh led a team of MLAs and other well wishers, who handed over the reward to the inspirational woman in Imphal, said officials from chief minister’s secretariat. MLAs L Surindro (Yasikul), Th Satyabarta (Yaiskul) and H Dingo (Sekmai) were also present during the felicitation.

“The cash reward was sponsored by some entrepreneurs from Manipur along with the Diaspora in US, UK, Canada and Singapore as an encouragement for her humane and heroic act and service,” a statement from CM’s secretariat said.

Laibi Oinam, a resident of Pangei Bazaar in Manipur’s Imphal East district, is mother of two sons and the sole breadwinner of the family.

Meanwhile, the total number of Covid-19 positive cases in Manipur has increased to 366 including 293 active cases, officials said.

The fresh positive cases are said to be returnees from other states.