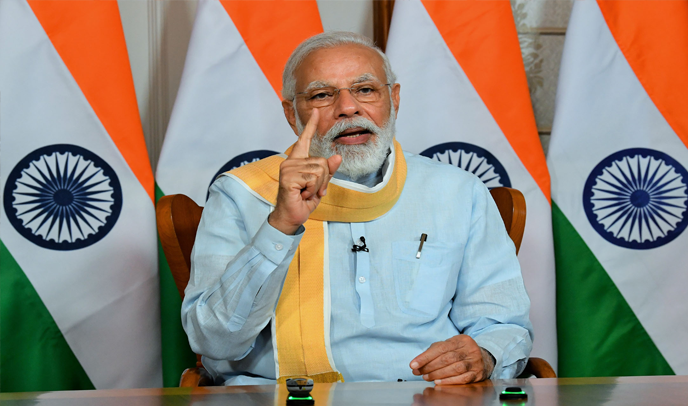 India has become a donor to Gavi while still being eligible for support from it, Prime Minister Modi said while addressing a virtual conference

India has pledged USD 15 million to Gavi, the international vaccine alliance which coordinates vaccinations across the world.

Announcing the decision while addressing the virtual Global Vaccine Summit on Thursday, Prime Minister Narendra Modi said that the alliance was a symbol of global solidarity.

India has become a donor to Gavi while still being eligible for support from the organisation. Referring to this during his address, PM Modi said India had done so since it values the work being done by Gavi.

In his address, Prime Minister Modi said that in addition to financial support, India’s huge demand also brings down the global price of vaccines for all, saving almost 400 million dollars for Gavi over the past five years.

The Prime Minister said India stands in solidarity with the world in these challenging times. India’s civilization teaches to see the world as one family; during this pandemic it had tried to live up to this teaching, he pointed out.

India had shared the country’s available stocks of medicines with over 120 countries, Prime Minister Modi said. It had forged a common response strategy in its immediate neighborhood and provided specific support to countries that sought it, while also protecting India’s own vast population, he noted.

Prime Minister Modi said the COVID-19 pandemic had exposed the limitations of global cooperation; for the first time in recent history, the human kind faced a clear common enemy.

India had a vast population and limited health facilities and it therefore understood the importance of immunization, PM Modi said.

India is the world’s foremost producer of vaccines and it contributes to the immunisation of about 60 percent of the world’s children, Prime Minister Modi said.

During his address, the Prime Minister pointed out that one of the first programmes launched by his government was Mission Indradhanush. This aims to ensure full vaccination of the country’s children and pregnant women, including those in the remote parts of the vast nation.

In order to expand this protection, India has added six new vaccines to its National Immunization Programme. The Prime Minister also explained how India had digitised its entire vaccine supply line and developed an electronic vaccine intelligence network to monitor the integrity of its cold chain.

The Prime Minister reiterated that India stood in solidarity with the world along with its proven capacity to produce quality medicines and vaccines at a low cost, its own domestic experience in rapidly expanding immunisation and its considerable scientific research talent.

India not only has the capacity to contribute to the global health efforts, but also has the will to do so in a spirit of sharing and caring, he said.