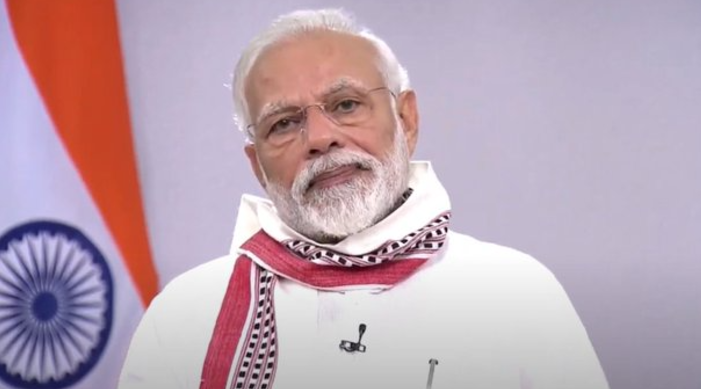 In such trying times when the world is fighting an invisible enemy, the singers, lyricists, and artists are scripting lines and singing songs that would increase confidence of the people, Prime Minister Narendra Modi said while addressing the Spic Macay’s International Convention via video conference on Monday late evening.

“Poets, singers and artists always scripted songs and music to bring out the valour out of the people in such times,” he said, appreciating the role played by musicians in alleviating the stress faced by the people due to the Covid-19 pandemic.

He also recalled how historically music has played an inspiring and a cohesive role in times of war and crisis.

In this country too, 130 Crore people came together to clap, sound bells, blow conch shells to energise the entire nation in its fight against the pandemic. “When 130 crore people come together with the same feeling and emotions it becomes music,” the Prime Minister said.

He appreciated the new elements in the Spic Macay convention this year like nature walk, heritage walk, literature and holistic food along with Yoga and Naad Yoga.

Elaborating on Naad Yoga, he said in India, Naad is considered to be the basis of music and also as the basis of the energy in self.

He said that this Naad reaches its crescendo or Brahmnaad when we regulate our inner energy through yoga and music.

This is the reason that both music and yoga have the power of meditation and motivation, both are immense sources of energy, the Prime Minister added.

The Prime Minister said, music has not only been a source of happiness, but also a means of service and a form of penance.

There have been many great musicians in our country who have lived their entire lives to serve the humanity, he said.

The Prime Minister said, the fusion of ancient art and music with technology is also a demand of the times.

Rising above the boundaries of states and languages, today music is also strengthening the ideal of ‘Ek Bharat Shreshtha Bharat’ more than ever, he said.

The Prime Minister appreciated the fact that people are giving new messages on social media through their creativity, furthering the country's campaign against corona.

The Prime Minister expressed the hope that this convention will also give a new direction to the nation in fighting against the coronavirus.