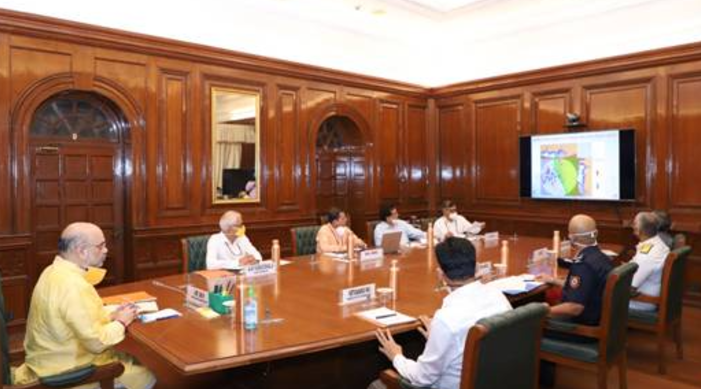 As cyclone Nisarga is expected to hit Maharashtra, Gujarat and also Daman and Diu in the next12 hours, the government doesn’t want to take anything for chances

In preparation for the cyclone which is expected to hit parts of Maharashtra, Gujarat and Daman and Diu, Union Home Minister Amit Shah on Monday late evening held a high level review meeting with officials of NDMA, NDRF, IMD, and Indian Coast Guard.

According to a statement released by the Ministry of Home Affairs, Union Home Minister Shah assured them all Central help in view of the impending cyclone and asked them to spell out in detail the requirements and resources needed to deal with the situation.

Earlier, India Meteorological Department informed that the well-marked low pressure area over South-East and adjoining East-Central Arabian Sea and Lakshadweep area concentrated into a Depression and it is very likely to intensify into a deep depression during next 12 hours and intensify further into a cyclonic storm over East-central Arabian Sea during the subsequent 24 hours.

Meanwhile, NDRF has already deployed 13 teams in Gujarat including 2 kept as reserve and 16 in Maharashtra including 7 teams as reserve, while one team each was deployed for Daman and Diu and Dadra and Nagar Haveli. NDRF is aiding the state governments for evacuation of people from low lying coastal areas.